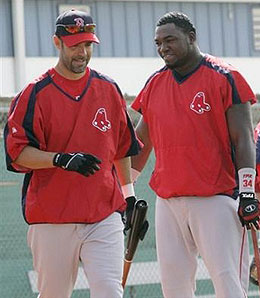 If Mike Lowell, left, leaves Boston, might he be replaced by A-Rod?

In his column today, FoxSports’s Ken Rosenthal offered up some interesting scenarios, including:

By RotoRob
This entry was posted on Tuesday, November 6th, 2007 at 6:15 pm and is filed under BASEBALL, RotoRob, Rumours. You can follow any responses to this entry through the RSS 2.0 feed. You can leave a response, or trackback from your own site.