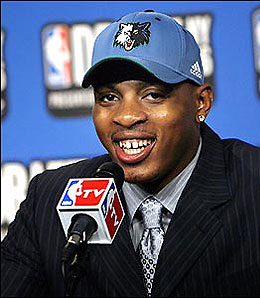 Randy Foye remains out indefinitely with a knee injury, but he could start running soon.

What’s your view as to when Randy Foye, Troy Murphy and Elton Brand come back to action?

The Minnesota Timberwolves have lost starting guard Randy Foye for several weeks due to a lingering left knee injury. An MRI test and CT scan performed on Foye’s knee revealed a stress reaction in his kneecap, and the team announced that he will be out indefinitely, although he may start running next week, so that’s promising.

Brand will be back after the All-Star break at some point. But, even when he does come back, he won’t be at 100 per cent. So, this season is going to be a fantasy wash for him.

Troy Murphy was only supposed to miss the first game, but he’s been out all three and remains a game-time decision tonight.

By James Morris
This entry was posted on Wednesday, November 7th, 2007 at 2:35 pm and is filed under BASKETBALL, Dear RotoRob, James Morris. You can follow any responses to this entry through the RSS 2.0 feed. You can leave a response, or trackback from your own site.