When Will Iron Mike Explode? 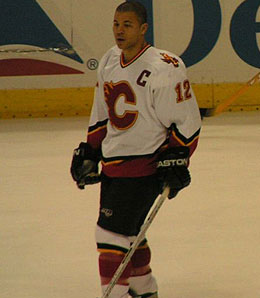 The Flames are having trouble with their special teams, but captain Jerome Iginla keeps lighting it up.

While the Flames aren’t exactly struggling, they have been tremendously inconsistent so far, blowing several big leads en route to a 5-3-3 start to the season.

There’s plenty to be optimistic about, but special teams and an inability to hold leads are definite areas of concern in the early going.

Currently, Calgary ranks 27th in penalty killing and isn’t much better on the power play, sitting at 19th.

Even with all they have going for them, that’s not going to be good enough if the Flames hope to move up from their current perch of third in the Northwest Division.

This definitely begs the question, when will notoriously short-tempered Mike Keenan blow his stack? The new head man for the Flames seems to have been patient so far, but history has shown that won’t last for long if his team keeps surrendering leads as they did twice against the Avalanche recently.

Captain Jerome Iginla has been doing his thing, challenging for the Art Ross Trophy with 16 points in 11 games, good for a share of fourth in the league.

After breaking through for a career-high 33 tallies last season, centre Daymond Langkow has taken it to a new level this year, on pace for a ridiculous 60 goals.

Winger Alex Tanguay is continuing the success he enjoyed during his first year in Calgary, averaging better than a point per game while putting up very fine +/- numbers.

Kristian Huselius started sluggishly, but with a pair of two-goal efforts over the past four games, he looks to be back on track.

Dion Phaneuf continues to develop his offensive skills and remains a tower of power on the blueline, tied for the team lead at +9. He is logging an unbelievable amount of ice time, averaging north of 27 and a half minutes per game.

And although his numbers are down in the early going, goaltender Mikka Kiprusoff is still among the best in the biz, currently tied for fourth in the NHL with five wins. Rumours about a contract extension for the Kipper continue to circulate, so if that remains up in the air for an extended period of time, it could affect him negatively, but otherwise, it should be steady as she goes for him this season.

The Flames host a struggling Nashville squad tomorrow night and then the tough Wings before heading out on the road for huge games against division rivals Minnesota and Colorado. So this is a big week for Calgary.

By this time next week, we should know whether Keenan’s blood pressure will remain constant or if he’ll blow a gasket. Stay tuned.

By RotoRob
This entry was posted on Monday, October 29th, 2007 at 2:06 pm and is filed under HOCKEY, RotoRob, Team report. You can follow any responses to this entry through the RSS 2.0 feed. You can leave a response, or trackback from your own site.