Stick a Fork in the Kid 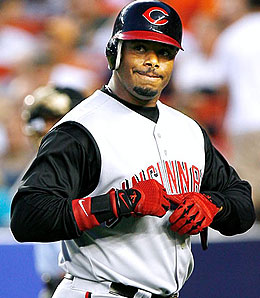 Ken Griffey Jr.’s latest malady will cost him the rest of the season.

What a shocker. Ken Griffey Jr. has suffered yet another season-ending injury. Well, at least it happened in late September as opposed to May. In today’s Daily Dose we check in on the Kid’s latest health woe.

Vernon Wells has been shut down; Jeff Kent’s 2008 option has been triggered; the Giants are pulling the plug on Tim Lincecum; Jon Garland was again solid against KC, but he ran into a superb Zack Greinke; J.R. Towles has arrived; Gary Matthews Jr. is very close to returning; and Trevor Hoffman extended one of his already impressive records.

There’s only so much time you can spend listening to elephants burp; at some point, you’ll need to turn your attention to more important things, like all the great fantasy baseball nuggets you’ll find in the Dose, for instance.

By RotoRob
This entry was posted on Friday, September 21st, 2007 at 11:52 am and is filed under BASEBALL, MLB Daily Dose. You can follow any responses to this entry through the RSS 2.0 feed. You can leave a response, or trackback from your own site.