The Wire Troll: The End is Here 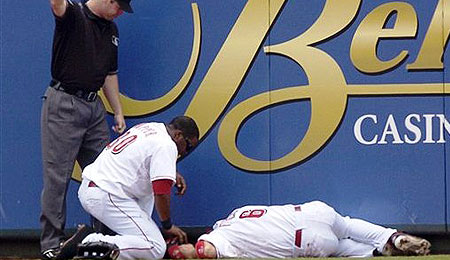 With his recent play, Norris Hopper (leaning) is proving that knocking out Ryan Freel, as he did in a late-May collision, won’t be his biggest fantasy impact this season.

Well, fantasy baseball season is just about over and the finals are in full swing. But, just to be honest with you, if you are not in the lead and are still looking at the waiver wire in the finals, you have some troubles. Or, if you are in the lead, just keep doing what got you in the lead, okay? That being said, management insists that I flash my brilliance one last time for the fantasy baseball season, so here we go.

Josh Fields: Not only does he qualify at third base, but in the outfield as well. That makes him a bit more valuable than, say, Mark Reynolds in my mind. Hitting .429 with eight runs scored, two dingers, and seven RBI over the past week doesn’t hurt either. The kid will see full-time duty down the stretch and he should see time in your lineup as well.

Norris Hopper: I know, who in the world is Norris Hopper? Well, he is the guy taking Josh Hamilton’s spot the rest of the season. A past week’s line of 14-for-33 (.424 BA) with six runs scored, three RBI, and three stolen bases will help you in the OF, just don’t count on any long balls from the kid.

Dan Johnson: He is, in fact, available in a lot of leagues because first base is a dime-a-dozen spot. Johnson’s going 9-for-22 with six runs, two taters, and four ribbies over the past week will help you if you have Albert Pujols as your starter. Pujols is most likely done this season, so you will want to find his replacement pretty quickly.

Dustin McGowan: I like this kid a lot. His next start comes against the Yankees on Sunday, and so far this season, he has a 3.66 ERA in 19 2/3 innings versus the Pinstripers. In his lone start at Yankee Stadium this season, McGowan went seven innings and gave up just two earned runs. The 27 strikeouts he’s racked up in his last three starts makes me believe the kid can and will do pretty well against the dreaded Yanks this weekend.

Now, just a little note for those who actually read this. If I helped you win your league title, I do in fact accept gifts, including money, mopeds, video game systems, and sexy pictures of women (but no two-ton honey buns allowed)! I’m not a chubby chaser! If I caused you to lose the lead, then that was because of your bad calls and not mine. If you saw no improvement at all from your team, then you didn’t read close enough or take my advice enough of the time. If you ask my wife, I am always wrong. But, if you look at my fantasy records, you will see that I win more than I lose.

By James Morris
This entry was posted on Friday, September 21st, 2007 at 2:36 pm and is filed under BASEBALL, The Wire Troll. You can follow any responses to this entry through the RSS 2.0 feed. You can leave a response, or trackback from your own site.