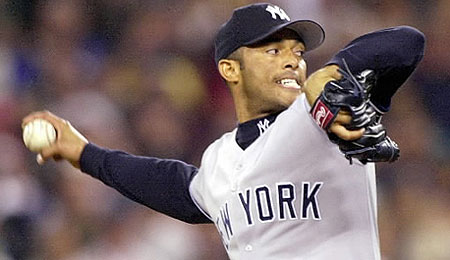 Mariano Rivera was shaky, but held on to mop up Andy Pettitte’s 200th career win, and reach 30 saves for the fifth straight year.

Andy Pettitte continued his great second half and career September mastery with a solid outing Wednesday, earning his 200th victory along way, as the Yankees have pulled within a game and a half of the reeling BoSox. In today’s Daily Dose, we check in on a suddenly frantic race in the AL East.

Mark Mulder is headed back under the knife; Albert Pujols and Ken Griffey Jr. could both be done for the season; Kevin Youkilis is making progress; the NL batting race is as exciting as it gets; Melvin Mora is hitting well, but his power has gone AWOL; Kaz Matsui is about to return; and Clay Buchholz authored his own demise.

While we can’t offer up anything as disturbing as the video of Andrew Meyer being violated at the John Kerry event, but we have plenty of fantasy baseball blurbs for you in today’s Dose.

By RotoRob
Tags: Mikko Koivu
This entry was posted on Thursday, September 20th, 2007 at 12:13 pm and is filed under Uncategorized. You can follow any responses to this entry through the RSS 2.0 feed. You can leave a response, or trackback from your own site.