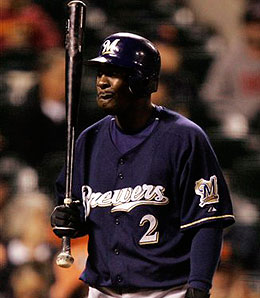 Bill Hall has been frustrated in his quest to build on his huge 2006 season. (AP Photo/Marcio Jose Sanchez)

Okay, I admit it. I dropped the ball on Bill Hall. Heading into the season, I really liked him as a great fantasy option. I mean, jeez, we were talking about a 35-homer hitter with shortstop qualification.

But what a fall from grace Hall has suffered in 2007. He started well enough, homering on Opening Day, but, unfortunately, that wasn’t exactly a portent of things to come, and it’s been downhill since.

There are plenty of excuses to offer up, starting with the fact that in making the transition to another skill position – centrefield – Hall was required to concentrate so much of the defensive aspects of his game, that his offense suffered. Badly. And he knows it.

“It’s probably my fault for getting away from my normal workout plan that I usually do to get myself prepared to play every day,” he told the Milwaukee Journal-Sentinel. Although he said he wasn’t blaming the move to the outfield, it’s obvious that this has been a factor in his inability to consolidate his breakout 2006 season.

Of course, an injury in early July played a big part. Hall was beginning to roll, recording a 911 OPS in June, but on July 5, he sprained his ankle when he leapt up to try to catch a Ryan Doumit home run, coming down and landing awkwardly. It’s ironic that playing a new position was again behind this woe, a serious sprain that cost him three weeks.

The Brewers actually expected him to be sidelined longer, and maybe he should have been. Since his return, Hall has been rancid. His OPS in a limited July was 699. In August, he’s batting just .200 with a 638 OPS. Since the All-Star break, Hall has been getting on base at a lowly .270 clip – unacceptable by any standards.

Earlier this month, he discovered that his hand positioning had altered from last season, and an adjustment caused him to get hot for about a week. Unfortunately, the recovery was short-lived, and since then, things are getting worse, not better.

Since August 19, Hall is 5-for-25 and he hasn’t homered or driven in a run in any of his last five games.

Last season, Hall emerged as a major revelation for the Brewers, pacing the team in dingers, runs, doubles, triples, RBI and walks. Everything he hit, he seemed to hit hard, with a shocking almost 54 per cent of his hits going for extra bases.

Of equal concern, Hall’s walk rate is down substantially, although as least he’s not whiffing as much either.

Another area of disappointment, from a fantasy perspective, is Hall’s running game, in decline for a couple of seasons. After peaking in 2005 with 18 steals in 24 attempts, he was 8-for-17 last year and is a horrific 3-for-8 this year. Obviously, the ankle is a slight factor here, but that doesn’t explain why he had just three thefts before the injury.

Hall clearly has some serious power potential, as he proved last season. Assuming he can clear the slates for 2008 and throw away a 2007 season filled with distractions, he could be a very nice sleeper on draft day next year.

By RotoRob
Tags: Bill Hall, Opening Day
This entry was posted on Tuesday, August 28th, 2007 at 1:41 pm and is filed under BASEBALL, Player profile. You can follow any responses to this entry through the RSS 2.0 feed. Both comments and pings are currently closed.