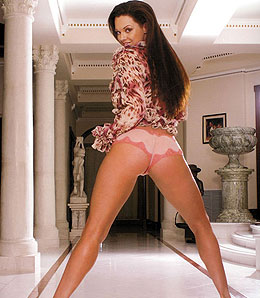 Was keeping this sweet booty in Steel City the reason the Pirates turned down a 2004 Ryan Howard-for-Kris Benson offer from the Phillies?

I recently read about one of those fascinating trades that never happened; the kind that make you wonder how history would have been altered had things gone differently (a concept that’s been on my mind quite a bit lately).

During the 2004 season, the word is that the Phillies wanted Kris Benson. And in return, they offered up Ryan Howard, who was still at the Double-A level when that campaign had gotten underway.

And the Pirates said ‘No, thanks.’ And no, it wasn’t because the Phils were also asking for Anna Benson. Apparently, at the time, the Pirates believed Brad Eldred was a very similar prospect to Howard. While that seems laughable now, they were the same age and both putting up similar power totals in the minors, albeit, Eldred doing it at a classification level below Howard.

History didn’t take long to prove how disastrous that non move was by Pittsburgh. In the season after the deal was proposed, Howard was the NL’s best rookie. Last year, of course, he was deemed the NL’s MVP. Eldred? Well, he missed most of last season because of injury issues and this year he’s been awful, batting barely over .200 for Triple-A Indianapolis, with just 14 homers in 79 games. He’s also fanned 86 times. Up with the Pirates briefly earlier this season, the free-swinging Eldred was even worse. Now 27, it’s hard to envision Eldred ever having much of a big league career, even if he is capable of sticking in the Show for any extended period of time.

By RotoRob
This entry was posted on Monday, August 27th, 2007 at 9:43 am and is filed under BASEBALL, Fantasy Notes. You can follow any responses to this entry through the RSS 2.0 feed. You can skip to the end and leave a response. Pinging is currently not allowed.