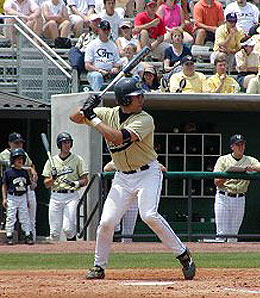 With Mike Mussina struggling and the Yanks forced to give prospect Ian Kennedy a trial, it will interesting to see what happens if the kid fails as well. Perhaps the Pinstripers will turn back to Chase Wright, up earlier this season when injuries were decimating the Yankee rotation. After his performance on Saturday, you’d think the kid had earned another shot. Wright’s four-hit shutout marked his fifth win with Double-A Trenton to go along with eight Triple-A wins and one with the big club. Wright’s done very well in Double-A, holding opponents to a .240 BAA in 54 2/3 innings, and avoiding the command issues he faced in Triple-A and the majors. He’s been particularly nasty against Binghamton, tossing 15 consecutive goose eggs against the Mets.

Don’t look for catcher Mike Nickeas to soon be following in fellow Canuck catcher Russell Martin’s footsteps. If he somehow makes it to the majors, it won’t be on the strength of his hitting. The 24-year-old has shown no offensive ability in recent seasons, and his .214 mark with one homer and 14 RBI in 60 games and 196 at-bats for Double-A Binghamton this season does not bode well. A former fifth round by Texas in 2004, Nickeas was dealt to the Mets for Victor Diaz last year. He’s looking like a future third-stringer at best, assuming he can find his way to Triple-A at some point.

Mets’ pitching prospect Jose Sanchez, after winning 22 games the past two years at Class-A and High-A, has endured some growing pains in his adjustment to Double-A. The 23-year-old righty has battled control issues and allowed too many baserunners to experience pronlonged success at this level, hence his lackluster 4-8, 4.23 mark through 26 starts. On the plus side, he’s enjoyed a much better second half, going 3-4, with a 3.55 ERA, and before taking a bitch-slapping on the weekend, Sanchez had rhymed off eight straight starts of three earned runs allowed or less. More of that will allow him to work his way into the picture down the road.

Jamal Strong, who we checked in on a couple of months ago, noting his fine OBP this year, has been sent back to Double-A and isn’t hitting like he’s ready to head back to Triple-A any time soon. He’s stuck in a 2-for-15 slump, batting just .212 in the last 10 games, .218 in August and .205 since the All-Star break. Overall, Strong has actually shown some modest improvements this year, with a 680 OPS through 270 combined at-bats, considering last year his OPS was just 631. But the fact that he’s had to spend more than half his season at Double-A suggests that Strong is further, not closer to getting back to the majors, where he last showed up in 2005.

By RotoRob
This entry was posted on Wednesday, August 29th, 2007 at 9:19 am and is filed under BASEBALL, Minor Matters. You can follow any responses to this entry through the RSS 2.0 feed. You can skip to the end and leave a response. Pinging is currently not allowed.