The Wire Troll: Take a Ride on the Redding 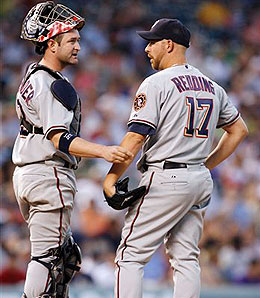 With the RotoRob team starting to take on a Phillyesque sort of demeanor from a health perspective these days, the task of trolling the waiver wire for this week has been left to yours truly. All the best to both Rob and James, and here’s hoping for speedy recoveries and quick returns from the DL. Looking at the week ahead, most league play is heading into crunch time and my focus for this period is on those hidden, and some not so hidden gems that might give you an opportunity to make a move in some of the counting categories. Stolen bases, cheap saves, wins and strikeouts can and usually do make a big difference heading into the final weeks of league play. With that said, let’s take a look at some potential difference makers heading into September.

Tim Redding: I keep waiting for the inevitable crash back down to earth, but it hasn’t happened yet. Since his call-up at the beginning of July, the oft-injured former ‘Stro has been on an unexplainable roll, culminating in a very nice shutout this past Monday of his original team. He’s only allowed more than three earned runs once in those nine starts, and in three of them has struck out eight, eight, and nine. What’s up with that? It certainly doesn’t fit with those Triple-A results from earlier in the year, but he’s cruising and until that crash comes, assuming it does, those stats are just to valuable to not be taking a chance on.

Jair Jurrjens: If nothing else, he’s got a neat name and coming off a one-hitter against the Tribe, the kid is certainly worth monitoring at this time. He’s young and I believe could be very vulnerable to that ugly outing, but definitely in real deep leagues he’s worth at least a look-see.

Joel Pineiro: Up until Saturday night, since the trade to the Cards, he had been a model of consistency — three starts, three wins, no walks and a chance for lots of wins as he’s playing for a team in a race that has seemingly found some offense. Pineiro could definitely be an asset over the next several weeks.

Nook Logan: If you’re looking for some stolen base and BA help down the stretch, he could be your guy. It would seem that Nook has found his stroke and is batting .358 with eight steals since August 1. Doesn’t everyone deserve a little Nookie once in a while?

Nate McLouth: With the multiple recent woes of Chris Duffy, a window of opportunity was opened for McLouth and he has most certainly taken advantage of this situation. Hitting .269 with seven HR, 16 RBI and five SB since August 1, if McLouth is not already rostered, this is one pick up that should be made right away.

Brian Wilson: Heading into the 2007 season, this 25-year-old was being touted as the replacement for closer Armando Benitez in San Francisco, but an ugly end to spring training deep-sixed that plan. In seven relief appearances since his recent call-up, Wilson has allowed only a couple of hits, three walks and no earned runs with one save. Is this the audition for ’08?

Chad Qualls: Going from the seventh-inning specialist to the set-up guy in Houston has gone very well for Qualls. Brad Lidge and his wonky knee have regained a hold on the closer role for now, but with Lidge’s healthy and overall dependability this year, there is certainly some potential for Qualls to gain a few saves over the next three-to-four weeks.

The Atlanta Braves bullpen: Bob Wickman was designated for assignment Friday and it looks like Rafael Soriano has the early lead here in filling the vacancy, although nothing can be ruled out at this early stage of the game. Despite his 2007 success to date, I don’t believe Peter Moylan is going to be the man here. The Braves do have two former minor league closers on the roster in Joey “Closer of the Future” Devine and Manny Acosta. In the event that Soriano doesn’t get it done, Devine might just be in line for some save opportunities over the next several weeks.

Carlos Silva: Yes, Carlos Silva. I had a hard time with this one as he’s been a constant target of mine over the years, but one can’t deny he’s been pitching very well as of late. Over his past five starts, Silva has allowed two or less earned runs in each, good for a couple wins, and — as always – he is keeping the WHIP at or around 1.00. He’s also managed to toss in a couple of six-strikeout games to boot, which is certainly a nice bonus.

Ubaldo Jimenez: A Colorado starting pitcher? What am I, mad? Probably, but that’s neither here nor there. Jimenez can throw strikes and for those not faint of heart, he might give you that big push in the K department. To date, five out of his seven starts have been solid with the two others being flat out ugly. The strikeout potential here is very high, as is the risk!

Woody Williams: Okay, the guy’s going on 50, but since the break, Williams has been for the most part a fairly steady contributor. He has allowed only six earned runs over his last four starts, with seven- and eight-K efforts in the mix. If you’re looking for some all-around help, one could do much worse.

Freddy Garcia: Scheduled for a couple more rehab starts, look for Garcia to return in early September. He definitely falls into the higher risk category, but could provide the Phillies and your fantasy team with some needed pitching depth over the last month.

Joey Votto: One would assume a September call-up is in order here, and if you’re looking to grab a potential five-category 1B of the future, this Canadian kid is your guy. In keeper formats, Votto should already be owned, but in re-draft leagues, he could potentially be of help in all categories over the balance of the year.

Anthony Reyes: Another St. Louis pitcher? It is hard to recommend a 2-13 starter, but in this case, with the Cards gearing up for a run and Phat Albert on a tear, one would think Reyes should get some offensive support, making wins a good possibility. He’s still walking too many and not striking out enough, but somewhere in the back of my mind are those playoff performances of last fall and those excellent Triple-A numbers. Since his most recent call-up at the end of July, Reyes has tossed four of six quality starts and he definitely merits some watching over the next while.

Tad Iguchi: I just had to sneak this one in, again. What would any listing of players be without the inclusion of at least one former NPB player? With Chase Utley looking at a return possibly as early as next weekend, is there a future at 3B for Tad? Since being acquired from the White Sox, Iguchi is batting a tad higher than .300 and, with five SB, he’s found his missing running game.

I don’t know if anyone else has noticed or even cares, but sometime since probably shortly after opening day, the Cincinnati Reds fell out of the playoff race. Even an extended recent run as the NL’s best team hasn’t salvaged the season. Isn’t it about time, Wayne Krivsky, that you got with the program of sorts, or at least defined one?

Using Everyday Eddie and Mike Stanton in key bullpen roles, and my current favourite — platooning Scott Hatteberg and Jorge Can’tDo at first base. Oh ya, these are definitely the cornerstones around which you want to build a future.

The Reds have a great looking young Canuck sitting in Triple-A Louisville named Joey Votto who has been playing extremely well. Why is he still in Louisville, Wayne? Votto is currently hitting a solid .299 with 21 HR, 87 RBI and 16 SBs. These are very nice numbers, to say the least, making Votto potentially one of the few five-category 1B types. Hatteberg has been a very useful player this year, but to be holding up Votto is ridiculous, considering the team is going nowhere.

Give the kid a shot. The fact that the Hatteberg/Cantu platoon is holding this kid up just flat out pisses me off. Is the 10 HR, 45 RBI from Hatteberg, or Cantu’s 584 OPS the cause for keeping Votto in the minors?

That he won player of the week honours for Louisville this past week certainly should make that phone call a bit easier and I’m sure we’ll be seeing him in September, but why September? Are they just being cheap, not wanting his service clock to start?

Now that I think of it, why is Hatteberg still in Cincy, instead of on any number of contending teams, coming off the bench and providing depth on a playoff type roster? Yes, I get that Cincy is suddenly playing as well as anyone in the NL, but it’s too little, too late. Anyhow my Votto is for Joey and the sooner the better! Are you listening, Wayne?

By Tim McLeod
Tags: Tim Redding
This entry was posted on Sunday, August 26th, 2007 at 10:42 am and is filed under BASEBALL, The Wire Troll. You can follow any responses to this entry through the RSS 2.0 feed. Both comments and pings are currently closed.