Dear RotoRob: Will Chase Cut It? 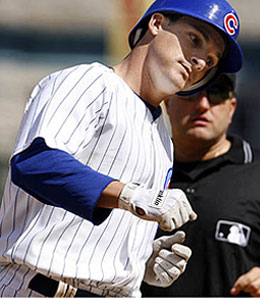 Ryan Theriot over Chase Utley? For the rest of the year, it may be the way to go. (AP/Nam Y. Huh)

Editor’s Note: James is still on the DL, so we wish him a speedy recovery and ask that readers with questions pending be patient.

It’s been a long time since our last question. This is kind of a keeper league question. I have Chase Utley on the DL while Ryan Theriot is hitting like a man right now and really scoring for me while Utley is out. Now, Utley will be back soon and I was wondering, should I stick with Theriot because he is hot and Utley might not come back at full strength and could possibly hurt my chances?

I am in third right now. I will have to decide to either keep Theriot or Utley from here on out.

Now, what I mean for the keeper part is I have five guys vying for my keeper league status. We can only keep three guys for next year. My choices are: A-Rod (I couldn’t get any good offers for him, so I still have him), Hanley Ramirez, Victor Martinez, Utley and Ryan Braun. Since I can’t keep two at one position I guess I was thinking A-Rod, Ramirez and Martinez, mostly because of scarcity at their positions.

Last year, I kept A-Rod, Utley and Martinez. I am worried about Utley coming back with pop in his bat kind of like Derrek Lee losing his power after a similiar injury.

So my question is, do I drop Utley when he comes back, thinking that I probably wouldn’t keep him next year, or not? I am really wavering on this one.

No worries about the time; I am retired and have plenty of it.

If I told you to drop Utley, I would be kicked out of the RotoRob family. I do agree that Theriot is hot right now, but Utley was pretty hot himself before the injury. Now, that being said, I do not think that you will get a whole lot out of Utley when he does return. You are looking at him coming back near the end of August and giving you a month of playing time. I doubt he will truly be “ready” when he does hit the big league roster.

So, I would stick with Theriot right now. Utley is a monster, but he will not do better over the final month of the season as other second basemen will.

You have to keep V-Mart at C, and A-Rod at 3B. Shortstop is as thin as C or 3B, so Ramirez is a fine choice there as well. I’d hate to cut Utley or Braun, but in this case I think I would. If I get your team into the top three this season, do I get a Christmas card or a Nintendo Wii?

By James Morris
This entry was posted on Saturday, August 25th, 2007 at 5:54 pm and is filed under BASEBALL, Dear RotoRob. You can follow any responses to this entry through the RSS 2.0 feed. You can leave a response, or trackback from your own site.