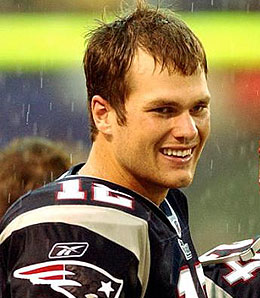 Tom Brady ranks fourth on our list of fantasy quarterbacks.

Derek and I finally sat down and came up with our quarterback rankings. We also have a customizable cheat sheet for you right here. How much do you love us?

1. Carson Palmer — Right, right. This is blasphemy. How can the Golden One not be your top-ranked quarterback? Blah blah blah. Here are the facts: Peyton Manning has led fantasy quarterback scoring exactly one time in his nine-year career. Palmer has lead fantasy quarterback scoring once in his three-year career. And, oh yeah, he outpaced Manning that season. Last year started slowly as Palmer recovered from the gruesome leg injury, and with everything going well so far this summer, there’s no reason he can’t hit over 4,000 yards and 30 touchdowns again this season.

2. Peyton Manning — He finally got over the hump and led all fantasy quarterback scoring. It was the first time he accomplished this, and it wouldn’t have happened had Donovan McNabb stayed healthy or Drew Brees not sucked in his last couple games. But that’s okay. I’m not bitter. Now, I didn’t actually see how the Colts did in the playoffs. But I have to assume they exited in the second round. Aw, those lovable Colts.

3. Drew Brees — Was it a fluke season for Brees? Until moving to the Bayou, Brees was always considered a top tier back-up fantasy quarterback. Suddenly, he became as productive as any signal caller in the league. Brees teamed up with a couple rookies, Marques Colston and Reggie Bush, to get this done. Both of those guys are still around and there’s no reason to believe the former Boilermaker will fall too much. Yes, 2006 was a career year, but 3,800 yards and 25 touchdowns seems reasonable for this season.

4. Tom Brady — The Patriots decided to try a little experiment. What would happen if a franchise quarterback, a player coming off of a 4,100-yard, 26-touchdown season, and one of the most efficient players in the league, was given basically no talent around him? Well, completions stayed the same. Attempts stayed about the same. The completion percentage went down slightly. But there is one statistic that sticks out. Yards per attempt. Brady had been hovering around 7.8 for the previous two seasons, but that fell to 6.8 last year. The touchdown total of 24 was solid, but his 3,500 yards was his lowest total since 2001. The Patriots brought in Randy Moss, Dont

By Andy Goldstein
Tags: Carson Palmer
This entry was posted on Saturday, August 25th, 2007 at 2:17 pm and is filed under Cheat sheets, FOOTBALL. You can follow any responses to this entry through the RSS 2.0 feed. Both comments and pings are currently closed.