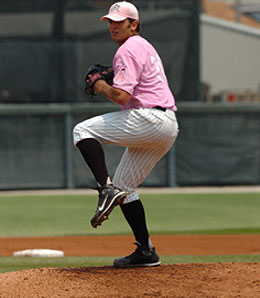 I found it interesting that with the Tigers missing Andrew Miller, the team turned to youngster Jair Jurrjens instead of Virgil Vasquez to start a huge game on Wednesday against the Tribe. With first place in the AL Central on the line, you would have thought that the Tigers would have opted to give Vasquez another shot, after he had already made a couple of spot starts with the team earlier this season. Admittedly, Vasquez hasn’t been strong in his last two Triple-A outings (16 hits and seven earned runs allowed in 10 2/3 innings), but that was coming off the heels of an absolutely tremendous July. Even with those two rough outings, Vasquez is 3-2, 2.72 since the All-Star break, continuing what has been a fine first season at Triple-A for the 25-year-old righty, taken in the seventh round in 2003. Overall, Vasquez is 10-5 with an excellent 116/31 K/BB ratio and a .251 BAA in 139 innings. Improved control has really put Vasquez in a position to increase his stock this year, and I hope Detroit recognizes this with a September call up at the very least.

Kenny Kelly, the former Devil Rays prospect, has landed in the White Sox system (his sixth organization) this year, and is enjoying his finest Triple-A season since 2004. However, the 28-year-old outfielder has struggled quite a bit recently, going 0-for-8 in his last two games, .212 over the past 10 and .158 in August after enjoying a big July (.304). Overall, the former second round pick for Tampa Bay in 1997 has played well, batting .256 with 39 runs, nine homers, 30 walks and 61 strikeouts in 246 at-bats with a 731 OPS. Kelly made it to the bigs with Tampa for two games back in 2000, but didn’t return to the majors until 2005 when he split the season between Cincinnati and Washington. He hasn’t been back since. Obviously, Kelly hasn’t been a candidate for everyday work in the majors for quite some time, but with his speed, he could be decent fifth outfielder/pinch-runner type should the Pale Hose decide they need someone of that ilk. I strongly doubt he’ll get the opportunity, but stranger things have happened.

By RotoRob
This entry was posted on Friday, August 17th, 2007 at 3:41 pm and is filed under BASEBALL, Minor Matters. You can follow any responses to this entry through the RSS 2.0 feed. You can leave a response, or trackback from your own site.