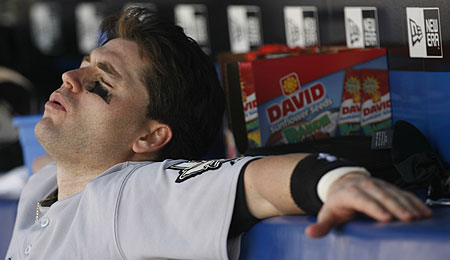 Now that he’s gotten off the bench, Luke Scott is playing extremely well for the Astros. (Karren Warren/Houston Chronicle)

I just checked my e-mail this morning and I have an offer for trade: Curt Schilling or Chien-Ming Wang and Kevin Youkilis for Ryan Braun and Matt Cain.

I have A-Rod to play third and Braun is wasting on my bench. I sent out an e-mail this morning explaining that Braun was on the block.

What do you think of this trade or should I wait for more offers? Will Schilling get back to form or should I be leery of him?

I don’t see Schilling making a resurgence. This is about what you can expect from him as long as he keeps pitching — a near .500 pitcher that will look unhittable at times, and get slapped around the yard at other times.

Prior to the All-Star break, Youk was mashing at a .328/.419/.502 clip. Since then, he is whiffle balling it at .242/.347/.404. His slugging percentage is lower than his OBP was! I am benching Youkilis in my leagues until he breaks out of this funk he is in. If his second-half average is still in the .240s by the time September arrives, I am cutting him.

Wang has some misleading stats. He has a sub 4.00 ERA (3.97), but his BAA is .273. The two-to-one K-BB ratio is not bad, but hitters are making contact with his pitches. Since the break, they have been finding his pitches to the tune of a .317 BA. I see a slide in his stats soon.

All in all, I would offer Rodriguez, stay away from Schilling and Wang, start Braun, and stick with Cain. You’ll get far more for A-Rod and I bet you could make a major move if you do what I suggest here.

If you are looking to make a stretch run, I might also take a look at Rick Ankiel. In only a short time, he has amassed five runs, three taters, and six RBI. That’s in a grand total of 16 at-bats! Maybe it tapers off, but right now I take him over those three. And, I did take him in all but one of my leagues (my team is in first place and stacked).

Now, the question is, if you win the league due to my expert advice, will you be chipping the site off a little something something in the donation bucket? Rob said we can’t get a window in the dungeon until the money starts coming in. And, let me assure you: it is dark down here!

By James Morris
This entry was posted on Thursday, August 16th, 2007 at 9:28 am and is filed under BASEBALL, Dear RotoRob. You can follow any responses to this entry through the RSS 2.0 feed. You can skip to the end and leave a response. Pinging is currently not allowed.