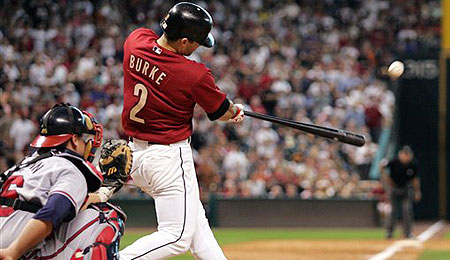 An inability to hit righties will doom Chris Burke to a career as a part-time player.

The Astros have spent most of the season struggling, but over the past week and change, they’ve made a mini push to get within shouting distance of an NL Central race that no one seems ready to take control of. Three straight wins and six out of eight have Houston up to 54-65 – certainly not a record worth parading, but the ‘Stros find themselves just 6.5 back of the suddenly struggling Cubs for second place in the division. They’re still 10.5 games back in the Wild Card race, so let’s put things in perspective. But with two more games coming up against a struggling Dodger team and series next week against the Nats and Pirates, Houston has a chance to make things at least mildly interesting down the stretch. However, considering the team needs a 28-15 finish to merely match last season’s 82 wins, this year looks like a major disappointment that will probably result in the third straight season in which the team’s win total will have declined. Well, at least fans can enjoy the non-stop salute to Craig Biggio.

Let’s take a closer look at some of the individual Astro performances.

Matt Albers enjoyed another strong outing against the Dodgers last night, scattering seven hits and three runs over 6 2/3 innings to win for the first time since early July. The 24-year-old righty is getting an opportunity to start more often this season, and he’s showing modest improvements, but assuming Chris Sampson (who threw a bullpen session Tuesday) returns shortly, Albers will head back to the pen.

If you’re getting frustrated with the development – or lack thereof – of Chris Burke, I can guarantee you’re not alone. While he came through last night with a two-run single and a double, this kind of effort has been far too sporadic for Burke to be of any use. I like the fact that he’s cut his strikeout rate, but that hasn’t translated into more times on base, and what modest power he flashed last season has dissipated. Now 27, this should have been the season Burke really broke through, and with the impending retirement of Biggio, it would have been the logical time for him to step up and seize the opportunity heading into 2008. Instead, Burke looks like he’s cemented himself as a part-time player, especially in light of his abysmal .199 BA against righties.

Rookie left-handed reliever Mark McLemore gave up a run last night, snapping a streak of five straight scoreless outings. After taking a bit of beating last month, McLemore had stepped up this month, winning twice while recording a 1.29 ERA over seven innings with nine strikeouts.

While Lance Berkman is enjoying a modest uptick this week (7-for-16 with five runs over the past four games), the long-anticipated breakout really hasn’t happened this season. With just 36 extra-base hits, this has been the worst power year of his career, and while he showed signs of life in June, he’s been unable to sustain that in the second half. Obviously, it’s not his patience that’s the problem (Berkman ranks seventh in the NL with 69 walks), and with five steals, he’s running more than at any time since 2004, but those of you that spent a mid-second round pick or higher to land one of the top sluggers in the game must be extremely distraught.

Sure, Brad Lidge suffered another meltdown on the weekend against the Brewers, but he’s bounded back with spotless saves in his last two outings, tossing 1 1/3 hitless frames in the process. Lidge, who will undergo knee surgery after the season, has had a slightly reduced workload this year, and while he’s been vilified for his inability to close out games at an acceptable rate (he’s 9-for-14 in save chances this year vs. 32-for-38 last season), overall, 2007 has been a better year for him thanks to improved control. The fact that his domination rate is down for the third straight season doesn’t bother me as long as his command is improving, which it is. I expect Lidge to enjoy a big-time rebound in 2008, making him an intriguing buy-low candidate in keeper leagues this winter.

Mark Loretta, who had slumped badly since the All-Star break, seems to have picked things up. He was 2-for-4 with a run last night, marking the fourth multi-hit game he’s had in the last five tries and fifth such effort in seven games. While he hasn’t been nearly as productive as he was last year for the BoSox, that’s really more a product of a weak Houston offense. Loretta is a very patient hitter who offers great help in deeper NL-only leagues because of his versatility – he already qualifies for use at shortstop, first base, third base and second base. That makes Loretta a very useful asset – especially in leagues that count OBP.

Every year I think Houston will upgrade at catcher, but each season Brad Ausmus remains the man behind the dish for the ‘Stros. Now 38, the three-time Gold Glove-winning backstop hasn’t really had anything to offer offensively since he arrived in Houston for his second tour of duty back in 2001. I’ll give him this – Ausmus is the rare catcher who will actually swipe the occasional base for you (nine seasons of at least five thefts), but it’s not as if he does anything else good enough to have value in anything but NL-only leagues or the deepest of mixed leagues. J.R. Towles is still probably a year away, so I’m hoping Houston will seek a one-year solution this winter when Ausmus’ current deal expires. But I won’t be shocked if he’s back again in 2008.

Carlos Lee has been one of the few bright spots on this Houston club day in and day out this season. Another nice game yesterday (2-for-4 with a run) jacked his August BA up to .364 and his OPS is now 964 since the All-Star break. With 24 homers (sixth in the NL), 95 RBI (second) and a team-leading .303 BA, Lee looks on pace to possibly earn himself a second NL Silver Slugger Award. He’s stayed healthy this year and remains productive (five straight seasons of at least 95 ribbies) despite the paucity of RBI chances on an Astros’ team that is near the bottom of the NL in OBP. Lee remains a feared slugger, but is no longer a good base runner. After successfully stealing 32 bases in 38 tries the past two seasons, he’s just 8-for-13 this year, although – disturbingly – that lowly figure leads the club. Small wonder the ‘Stros have more steals than only Pittsburgh and St. Louis among NL clubs.

Jason Lane delivered an RBI single and scored last night, giving him a two-game streak of 2-for-5 with two runs, a homer, three RBI and three walks – a veritable bonanza for the weak-hitting veteran. Lane is suffering through the worst season of his career, and his PT has experienced a corresponding decline, including plenty of Triple-A time. To his credit, he’s been slightly better since the break and, with seven walks in August – including five over the past three games – at least he’s finding some way to get on base. Okay, yes, I’m reaching here.

By RotoRob
This entry was posted on Wednesday, August 15th, 2007 at 2:23 pm and is filed under BASEBALL, Team report. You can follow any responses to this entry through the RSS 2.0 feed. You can leave a response, or trackback from your own site.