For the Love of the Game or Just Chasing a Ring? 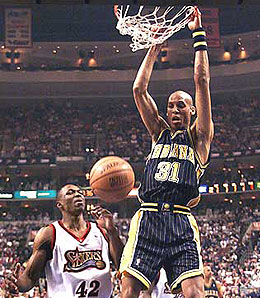 James wonders whether Reggie Miller might be considering coming out of retirement for the wrong reasons.

Reggie Miller always held himself up as someone that didn’t chase the ring. He put his loyalty in front of his desire to win a NBA title. Any true Pacers fan has to be wondering why Miller would risk being viewed as a Karl Malone with the Lakers or Willie Mays with the Mets. Is winning a ring so important that you would not even look at the team you played your entire career with if and when you decide you want to play again? It sure looks that way.

Miller talked with a local Indiana radio show Wednesday and said he is trying to “shock” his body back into shape. However, he won’t know if he will return to the NBA until mid-September. “I have no idea what I’m going to do. I’m working out twice a day. It would be irresponsible of me not to go full bore now to see what I can do. I’ll make a decision soon. By the middle of September I should have an answer…This team won the lottery when they got Kevin Garnett.” Miller is not just talking here, in my opinion. I think he really wants that ring and probably will sign with the Celtics in an attempt to get it.

If Miller does in fact sign on with the Celtics this season he will be nothing more than a gimmick while on the floor. He will be looked at to spot up and shoot, but nothing else. His fantasy value will be in his name alone, as I am sure someone will jump up and grab him in the draft even though his numbers will relegate him to waiver wire fodder. You need not be that GM as you can just ignore Miller and get guys that will see minutes that matter.

As a Pacers’ fan, it truly hurts me to see a player of Miller’s calibre come out of retirement to ride the coattails of others’ success in order to win a ring. To me, if the Celtics do win a title with Miller on the roster this season and he doesn’t play a role worthy of being at least the seventh man off the bench, the ring will always have an asterisk beside it when I talk about it. Yes, he won the title, but he didn’t win it. Garnett, Ray Allen, and Paul Pierce won the title; Miller just signed with the team he thought had the best chance to win a ring. Loyalty is loyalty, Reggie; title chasing is title chasing. Stay away and keep the legacy alive for Pacers’ fans around the world. Don’t be Willie Mays wandering around lost in the Mets’ outfield.

By James Morris
This entry was posted on Friday, August 17th, 2007 at 12:43 pm and is filed under BASKETBALL. You can follow any responses to this entry through the RSS 2.0 feed. You can leave a response, or trackback from your own site.