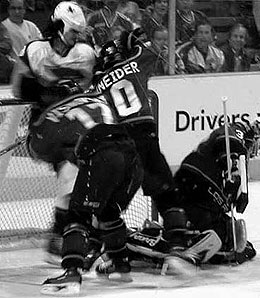 Mike Ricci, shown here doing what he did best — distracting opponents — has retired from the NHL after 16 seasons.

Today marks the end of the line for unrestricted free agent Mike Ricci, a veteran of 16 NHL campaigns.

In reality, this decision just lays to rest a career that had ended quite some time ago. In fact, he’s been thinking about moving on since January, when the Phoenix Coyotes placed him on the injured reserve list because of ongoing neck issues.

But today, during the Peterborough Professional Hockey Alumni charity golf tournament, Ricci made his formal announcement, ending a career that began in 1990-91 with the Flyers, as part of that year’s superb rookie class, and featuring stops in Quebec/Colorado and San Jose before spending his final two season with the ‘Yotes.

Ricci underwent neck surgery a year ago, but the injury never responded well enough for him to resume his career.

The 35-year-old forward had scored 10 goals in 85 games for Phoenix, but the neck problem limited him to just seven games last season.

For his career, Ricci played in 1,099 games, recording 605 points and amassing 974 minutes in penalties. He was a member of the Avalanche’s 1996 Stanley Cup winning team.

Ricci accumulated much of his offense early in his career, scoring 30 goals for the Nordiques in 1993-94, a season after his best offensive campaign ever (27-51-78). That was the only season in his career that Ricci managed over a point per game and he also set his personal high for PM that year with 123.

Ricci was a key component of the deal that sent Eric Lindros to Philadelphia, but in recent years, he had not been a fantasy factor in the least.

He’ll be remembered as a fierce warrior, a real leader, a strong defensive player, and a player who once upon a time was a tremendous two-way force. Oh, and let’s not forget that hair.

By RotoRob
This entry was posted on Tuesday, August 14th, 2007 at 9:02 pm and is filed under HOCKEY, Transactional analysis. You can follow any responses to this entry through the RSS 2.0 feed. You can skip to the end and leave a response. Pinging is currently not allowed.