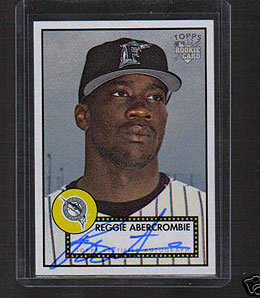 It might be time for the Marlins to give Reggie Abercrombie another shot. After spending the season as the Fish’s fourth outfielder in 2006, Abercrombie was farmed out to Triple-A Albuquerque a couple of months ago after struggling to a 579 OPS through 20 games in the bigs. Originally a 23rd round pick by the Dodgers in 1999, Abercrombie has taken the demotion in stride, enjoying his finest Triple-A season yet with a .308 BA, 10 homers, 30 steals and a .350 OBP in 279 at-bats. He still can’t take a walk to save his life, but after turning 26 last month, Abercrombie is proving that he still could make it in the Show. He struggled when first demoted, but got hot in July (946 OPS) and a big night on Monday (3-for-4, home run, double, two runs) took his OPS up to 921 for August. Given Abercrombie’s strong platoon splits, I still believe he could be an extra outfielder/pinch runner supreme at the very least. He should be back with the Marlins in September, and could be a decent source of cheap steals if they decide to give him a real look.

While Abercrombie looks to work his way back to the majors, another 26-year-old outfielder and former top prospect appears to be slipping further away. After hitting a two-run homer last night, Laynce Nix has picked things up with hits in four straight games and an 851 OPS in August, but really, it’s been a major year of regression for the one-time Rangers’ prospect. Taken in the fourth round in 2000 by Texas, Nix headed to the Brewers’ organization in the Carlos Lee deal last year in a move I thought would have a positive impact on his career. At first, the move did wonders, as Nix tore it up for Nashville last year, earning himself a 10-game trial with the Brewers in which he held his own. But overall, this year has been a forgettable experience as horrible struggles in July (626 OPS) have brought his overall numbers down (.244 BA, 44 runs, 16 homers, 51 RBI, 24 walks) in a season in which he actually had to spend four games back down at Double-A. Nix, a veteran of 250 career MLB games (.241 BA, .411 SLG), has yet to appear with the Brewers this year, and while his recent streak is promising, I doubt it’s enough for him to get a look in September on a team that will be in the midst of a playoff race.

Yet another 26-year-old (turns 27 next month) I wouldn’t be holding my breath on for a return to the bigs is Chris George, the southpaw taken by the Royals 31st overall back in 1998. George took yet another beating last night, dropping to 5-10 on the year after giving up nine hits and five earned runs over six innings. Over his last seven starts, interrupted by a stint on the DL because of a strained hammy, George has been shellacked for 50 hits and 36 earned runs over 33 1/3 innings. His ERA was 6.88 in June, 7.84 in July and is up to 7.07 in August. How long will the Isotopes keep him in the rotation at this rate? For the year, George has given up 135 hits and 85 runs in 120 innings, allowing opponents to hit .285 and generally suffering a regression from his 2006 season (which wasn’t so hot, either). Having last appeared in the majors in 2004, George looks like his career is winding down, especially considering he can’t even get lefties out this year (.301 BAA).

By RotoRob
Tags: Reggie Abercrombie
This entry was posted on Tuesday, August 14th, 2007 at 1:47 pm and is filed under BASEBALL, Minor Matters. You can follow any responses to this entry through the RSS 2.0 feed. Both comments and pings are currently closed.