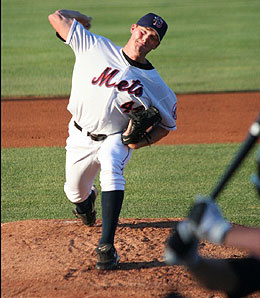 While he hasn’t dominated, Philip Humber has certainly held his own in his first season at Triple-A.

It’s been about three weeks since we checked in with some minor league notes, so let’s rectify that situation today.

Toronto fans may recall veteran minor league infielder Luis Figueroa, up briefly with the Jays last season. The 33-year-old switch-hitting shortstop is now in the Giants’ system, and has been hitting well of late, going 5-for-12 with three runs, a double, two homers and seven RBI over his last three games for Triple-A Fresno. He was up with the Giants briefly in June when Rich Aurilia was out, going 1-for-5 before being designated for assignment. Originally signed out of Puerto Rico by the Pirates in 1997, Figueroa has also toiled in the Mets’, Expos’, and Red Sox’ organizations. For the season, he’s batting .292 with a 715 OPS through 94 games and 349 at-bats with 16 doubles and 39 RBI – pretty well exactly his level of performance in 2006. He’s a contact hitter (just 26 strikeouts) with a bit of speed (six steals), but is not exactly running well this year (eight times caught). The biggest roadblock Figueroa faces – beyond his advancing age at this point – is his inability to hit righties. While he’s handled southpaws with ease (.345 BA), Figueroa has struggled vs. righties.

Mets pitching prospect Philip Humber took a beating Monday, but he had pitched very well in his three previous starts, so I wouldn’t worry. The 23-year-old righty, taken third overall in 2004 after a brilliant career at Rice, is not exactly dominating, but he’s holding his own in his first season at Triple-A (10-7 in 21 starts and 117 IP with a 4.38 ERA, 99 Ks, 36 walks and a .259 BAA). The Mets have wisely been patient this year with Humber, one of their top pitching prospects, but you can expect to see him in September (although probably not in a very important situation).

Met farmhand Fernando Tatis is on a tear. Before taking an 0-for-4 Wednesday, he had scored in 10 of 11 games and had hit safely in seven straight, driving in six over that stretch. When we last checked in on Tatis early this season, we presumed he was on his last legs, but a .379 July and a .396 mark since the break has him up to .274 through 409 at-bats. Although he’s whiffed 85 times, Tatis is hitting with power again with 25 doubles and 17 homers. He’s never going to rediscover his 1999 form (when he hit almost .300 with 34 homers and 21 steals), but it’s nice to see that he’s not completely toast. Certainly, the career we expected him to have after that monster year was compiled at the age of 24 never transpired, thanks mostly to conditioning and work ethic issues, but it’s nice to see that there may still be a chance he can make it back to the majors.

One-time Padre prospect Jake Gautreau has landed in the Mets’ system, and while he’s enjoying a better year than his nightmare 2006 season, he’s still no closer to making his major league debut after four years at Triple-A. Taken 14th overall back in 2001, Gautreau’s once-promising career really stalled out as he reached the higher levels of the minors. Now 27, he started this season very strong, but he’s been in an awful slump the past few weeks, batting just .231 in July and only .156 in August. And it’s getting worse, not better, with a .135 mark over the past 10 games. Overall, he’s down to .259 with 30 RBI in 53 games and he’s showing some pop (.420 slugging), but the second baseman’s inability to hit lefties (.143) will ultimately doom him. Also, the fact that he never had much speed worked against his chances of becoming a utility infielder/pinch runner type.

How is it than veteran reliever Dan Giese has never pitched a game in the major leagues? Since first reaching Triple-A in 2003, he’s posted solid numbers in every season but one, but has never got the call. No wonder the 34th rounder by the BoSox in 1999 got frustrated and retired mid-season in 2005. After enjoying a big year the previous season yet not getting a September call, he must have been pissed. Giese returned in 2006 and excelled and he’s been even better in this, his first season in the Giants’ organization. Now 30, the righty has not been scored on in his last 10 appearances, lowering his ERA to 2.14 for the year to go along with a 3-0 record. His command – 67 Ks and eight walks in 63 IP – has been off the charts. While the Giants’ pen has been pretty good this year, surely they could find a spot for this dude. Jack Taschner has pitched much better as of late, but you’d have to think that Giese could do just as good a job.

Another scorching reliever is 27-year-old lefty Willie Collazo. He’s tossed 15 1/3 consecutive scoreless innings for the Triple-A New Orleans Zephyrs to lower his ERA to 3.00 for the season. A control pitcher, Collazo was named to the mid-season PCL All-Star team and was the PCL Pitcher of the Week for the period ending July 30. Now in his second season in the Mets’ system, he’s really taken off after being converted back into a reliever, his job for several years in the Atlanta system before spending the last three years (the first two in the Angels’ system) starting. The Mets have things covered from the left side in the bullpen these days with Pedro Feliciano and Scott Schoeneweis (not to mention closer Billy Wagner), but should they need help in this area, Collazo looks ready to supply it.

As we expected, the Mets called up Mike DiFelice at the end of July, but he never actually appeared in a game for them, and a couple of days later he was DFAed, and is now back at Triple-A New Orleans. The 38-year-old catcher is actually enjoying a strong year in the minors, his best Triple-A campaign in a couple of years. At this point in his career, he’s obviously just an insurance policy, and when Paul Lo Duca was hurt, the Mets were forced to cash that policy in for a brief time. It’s a shame he didn’t get any action, however, as DiFelice is just two at-bats shy of the 1,500 mark for his career.

By RotoRob
This entry was posted on Friday, August 10th, 2007 at 12:16 am and is filed under BASEBALL, Minor Matters. You can follow any responses to this entry through the RSS 2.0 feed. You can leave a response, or trackback from your own site.