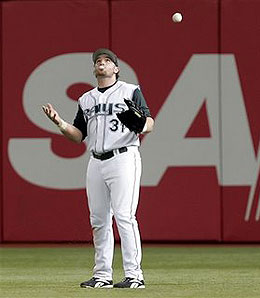 Jonny Gomes isn’t much of an outfielder, nor can he select a good luck charm that works, but he’s enjoying a big season at the plate.

In an article we published yesterday, my esteemed colleague James Morris mentioned that he “would very rarely pick a Devil Ray at this point in the season if my team needed a replacement.”

That made me wonder whether it was a good idea to grab Rays or not, so I thought today would be an ideal time to take a closer look at the club.

The Rays hammered Detroit Wednesday to snap an eight-game road losing streak and win for just the third time in 22 tries away from the Trop. So…any questions about why they are occupying their oh-so-familiar perch at the bottom of the American League East? Well, here’s one: what happened to Jomes Gomes’ good luck rooster?

Speaking of Gomes (a player we recommended last month), he came through big-time Tuesday night with three hits, two runs and four RBI, missing the cycle by only a double. Gomes is up to .265 now thanks to his continued mashing of southpaws. I’d love to see him get more PT, but he continues have difficulties with righties (although, in fairness, he’s improved quite a bit this year in that respect).

Closer Al Reyes has been back for over three weeks after landing on the DL for a mild rotator cuff strain last month. He’s made all of seven appearances since then, one of which involved giving up four runs in one inning to send his ERA skyrocketing. While Reyes was away, Gary Glover handled the only two save chances. Since Reyes has returned, the Rays have not have a save chance, so it’s a reasonable question to wonder if he still has the job. While Reyes was not moved at the deadline (there where rumors he was headed to Seattle), Tampa Bay did make a move by bringing in Dan Wheeler, someone who could easily wrestle the job away from Reyes. Assuming, that is, that another save opportunity emerges this season. Consider Reyes the closer for now — especially after Wheeler’s implosion in his last outing – but keep a close eye on this situation.

Tampa Bay has given up on Casey Fossum, outrighting him to the minors a couple of days ago. He has until Friday to decide whether to accept the demotion or become a free agent. Demoted to long relief this year, major problems keeping the ball in the park have led to a 7.70 ERA for Fossum.

Jon Switzer has been called up from Triple-A Durham to replace Fossum. Giving up dingers has not been a problem for Switzer. He has not been taken yard once in 23 appearances for Durham, recording a lights out ERA of 0.82. Switzer struggled in a brief call-up with the big club last month, but I’m expecting much better work this time around.

One Ray who was moved at the deadline is the enigmatic Jorge Cantu, whose career just spiraled down the drain in Tampa Bay after his huge 2005 season. He was dealt in a multi-player trade to Cincy, and the Reds have sent him to Triple-A to try to rediscover his stroke. So far, it’s working, with an 874 OPS in 49 at-bats at Louisville. Still just 25, Cantu could easily find his way back now that he’s been given new life in another organization.

The Rays also gave up on outfielder Dustan Mohr after he showed nothing with the big club. He was designated for assignment last month, and opted for free agency. He’s still looking for a job.

What’s gotten into Dioner Navarro lately? The dude has homered in two straight games and has four long balls in the past 14 games after managing just one in his first 66 contests. Urine test, please. His three-hit night Wednesday vaulted him over the Mendoza Line. Remember how highly touted this kid was and note that he is still just 23 years old. It’s just a couple of weeks, but clearly, let’s not give up on Navarro quite yet (even if this is his first taste of a plus .200 BA since May 15).

Josh Wilson is getting to play a bit more these days since Ty Wigginton was dealt away. While he offers no power at all, Wilson can deliver a decent BA and he’s managed three hits in his last two games. Until the Rays decide to bring up Evan Longoria, Wilson should get his chances, especially with Ben Zobrist unable to break out of a wet paper bag with his bat.

Okay, so he’s not going to mash 30 homers this year, but that doesn’t mean Delmon Young’s rookie season is a disappointment. Yes, I’d like to see him draw a few more walks, but he drove in two runs last night and has hit in five straight games, taking his August BA up to .370 after a .343 July.

How gratifying must it have been for Carlos Pena to deliver a couple of RBI last night to help beat his old club? After getting cut free from Detroit, Pena failed to impress in chances with both the Red Sox and Yankees and just over a year ago, I speculated that he was going to be relegated to the life of a Quad-A player. Well, Pena was given another chance in Tampa Bay, and he’s run with it. Cutting down his strikeouts has been the key as he’s enjoying his finest big league season. AL Comeback Player of the Year? You could be looking at him.

About a month ago, Scott Kazmir was looking like anything but a sixth-round pitcher (where he was taken in our pre-season draft). As of July 8, he was 5-6 with a 4.41 ERA. It had been over a year (0-4 in 14 starts) since he had won a game at home. Things were not looking good for the young southpaw. But man, has he ever been rolling since then. Heading into his start this afternoon, Kazmir has given up just 27 hits and six runs (five earned) over 32 2/3 innings over his last five starts. He’s walked just 11 and struck out 38 and has run his streak of starts without allowing a home run to seven. He still walks too many (fourth in the league), but he can strike them out with the best (third in the AL). Kazmir is showing what he can do when he stays healthy, and in the progress, he’s moving up on some franchise marks. He’s already passed Ryan Rupe’s record of 83 career starts as a Ray, and recently moved past Albie Lopez and Esteban Yan for sole possession of second place on the team’s win list (with 30, he’s now just five back of the immortal Victor Zambrano). Kazmir also hit the 500-strikeout plateau for his career last month, becoming just the 15th southpaw since 1900 to reach that milestone before turning 24.

By RotoRob
This entry was posted on Thursday, August 9th, 2007 at 11:52 am and is filed under BASEBALL, Team report. You can follow any responses to this entry through the RSS 2.0 feed. You can leave a response, or trackback from your own site.