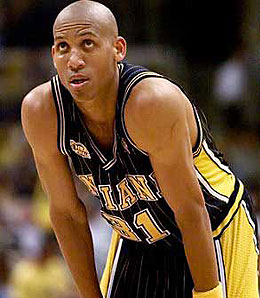 Can the Celtics lure Reggie Miller out of retirement? A lineup filled with Hall of Fame bound studs will sure help.

Quickly getting over their disappointment of being burned in the draft lottery, the Celtics have rebounded to make two of the biggest splashes this offseason with the acquisitions of Ray Allen and Kevin Garnett.

Do they have a third and even bigger surprise up their sleeves?

Apparently, the Celtics are deadly serious about winning a 17th NBA title, and they’re even willing to lure another future Hall of Famer out retirement to help with the quest.

After trading seven players/draft choices for Garnett, Boston has plenty of holes to fill. Beyond the projected starting lineup of Rajon Rondo, Allen, Paul Pierce, Garnett and Kendrick Perkins, the Celtics have just four other players currently signed. Obviously unhappy with the current free agent crop, Boston is looking to the past to fill out its roster.

Will the former Pacer great be up for the task?

Ainge says he’s already had a couple of talks with Miller about how the TNT analyst can help. Just imagine having Miller on the bench to spell Allen and Pierce. Doc Rivers must be asking plenty of people to pinch him these days.

Boston has most of its mid-level exception to spend, and Miller is tempted – he’s at least thinking about it. The opportunity to play with three players the calibre of Allen, KG and Pierce has to be tempting.

Ironically, the last time Boston made the postseason, back in 2005, it was Miller – in his swan song – that helped eliminate the men in green.

But he’s almost 42 now and two years removed from the game. Miller says he needs to assess his desire to play again, not to mention what he’s capable of bringing to the table.

The 18-year veteran, who played his entire career in Indiana, currently ranks 13th on the NBA all-time scoring list with 25,279 points. No one has ever attempted or made more 3-pointers than Miller.

Assuming he returns and can stay healthy, Miller could approach the top 10 this season, although the man he’s chasing for 12th – Shaquille O’Neal – is still active.

Pacer president Donnie Walsh said he was surprised that Miller didn’t reach out to Indy first if he was considering a comeback. Perhaps that’s because, with all due respect, Jermaine O’Neal, Jamaal Tinsley and Danny Granger don’t exactly offer the same cache as KG, Pierce and Allen.

Besides, the Pacers already retired Miller’s No. 31 last year. Who wants the hassle of having to climb up to the rafters to get dressed?

Boston, coming off a 24-win season and the author of exactly three playoff series victories in the nine years since drafting Pierce, needed this kind of overhaul.

Now, it’s time to sit back, crack open a cold one, and see how it all plays out.

By RotoRob
This entry was posted on Wednesday, August 8th, 2007 at 7:53 pm and is filed under BASKETBALL. You can follow any responses to this entry through the RSS 2.0 feed. You can leave a response, or trackback from your own site.