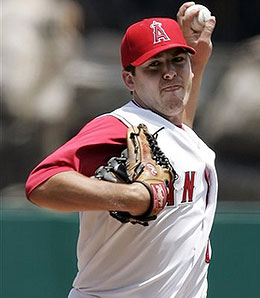 Joe Saunders is taking advantage of his opportunity with the Angels.

With a very light schedule on tap tonight – especially in the AL where the Angels vs. the A’s is the only night game scheduled with the Twins postponing their game in the wake of the bridge tragedy — we’ve decided to file a few fantasy related notes to help tide you over until the weekend.

How happy do you think the Angels are that they didn’t deal away Joe Saunders this past offseason? Tonight in Oakland he looks to improve on his 4-0 record and 3.16 ERA and with Ervin Santana requiring a demotion and Bartolo Colon imploding and finally succumbing to injury, Saunders has been quite valuable indeed. I’d like to see him reduce his hit rates, but Saunders has compensated by walking just two batters total over his last three starts. I think it’s time he gained some consideration as a viable fantasy option. Didn’t this exact same thing happen last year?

Saunders will be opposed by Chad Gaudin, who seemed like a decent bet and certainly someone fantasy owners were looking at as recently as a couple of weeks ago. However, Gaudin’s Cinderalla story looks all but dead with 24 hits and 18 walks (ugh) allowed over his last 21 2/3 innings, translating into 19 runs surrendered. He’s fanned 17 and I like the fact that his K rate has risen this year (although 85 Ks in 131 IP is still nowhere near dominant), but control is not the friend of Gaudin. He’s third in the AL with 66 walks and while he’s been pretty good about keeping the ball in the park this season, he’s been burned by three long balls in his last two starts. That makes me nervous.

Carl Crawford smacked three hits Wednesday, including a two-run homer to give the Rays the lead over Toronto en route to victory. It was very nice to see him go yard considering many of his homers have become doubles this year (with 25, he’s already surpassed his 2006 season total in two-baggers), and that’s not a good thing considering he’s striking out far more often. Crawford has said he’ll be playing in pain for the remainder of the season because of his wrist, so owners will gladly take days like this, the three-hit showing pushing him back up to .294. Having said that, if your trading deadline has yet to pass, Crawford is a good person to shop around after his big night. That wrist could prove problematic on and off until next season.

It’s been a forgettable season for Ronny Paulino, as he does his best to prove he’s not the long-term answer at catcher in Pittsburgh. Tuesday, he screwed up defensively twice to allow the Cardinals to take the lead and ultimately win. With the first two batters in the sixth inning erased, Scott Rolen singled, but then Paulino was unable to corral Ryan Ludwick’s foul pop behind the plate, getting a late break on it and having trouble picking the ball up in the air. That error kept the inning alive, and Ludwick took advantage by smacking a double to centre. However, with the relay in quickly to Jack Wilson, Rolen looked like a dead duck at the plate. But Paulino dropped Wilson’s toss and the Cards took the lead. Ugh. Flash forward to Wednesday night. Paulino makes amends by smacking a grand slam while adding a single and second run to help Pittsburgh explode for a 15-1 win over St. Louis. Even with the slam, that’s just 30 RBI for Paulino this year and combined with his inability to get on base, he’s been fantasy anathema this year. It’s about time for Ryan Doumit to start taking more of Paulino’s PT away, isn’t it?

Did you happen to notice that Tony Armas Jr. earned his first win of the season last night? Shifted back into the rotation in place of the demoted John VanBenschoten, Armas was quite impressive, surrendering just four hits and one run over 6 1/3 innings while he struck out five and walked just one. It was the first time he had won as a starter in over 10 months. Armas has been battered by the long ball this year, and generally been just too hittable, but this was promising. I’m not suggesting he should be picked up, but when he’s been healthy (a rare occurrence, of course), he has shown flashes. So at least watch him and see how it goes. He could emerge as a late-season sleeper.

We checked in on Jorge Posada early this year, and expressed surprise that — at his age — he continued to step it up What’s even more surprising, however, is that he’s kept it up, even into the second half, when catchers – especially ones just over two weeks from their 36th birthdays – tend to wear down. But after his two-homer game last night, Posada is 9-for-14 with four homers, seven runs and seven RBI in his last four games. Does that sound like someone who is wilting in the heat? He’s fourth in the AL in hitting at .341, fourth in OBP and seventh in slugging. Posada has parlayed a more patient approach into a career season in his mid-30s. I’m either very impressed or very skeptical (urine test, please).

The Tigers are slumping (luckily, so are the Indians) and things don’t get any easier as they have to take on Mark Buehrle on Friday. Buehrle is enjoying one of his finest big league seasons, ranking second in the AL in complete games, sixth in ERA (3.06) and in the top 10 in both WHIP and innings pitched. His K rate has rebounded somewhat with 85 punchouts in 144 1/3 innings and his command has been superb. Buehrle is coming off an excellent outing against the Jays on Saturday, hurling eight shutout innings at them. Coincidentally, Friday marks the six-year anniversary of perhaps the greatest game in his career – a one-hit shutout against Tampa Bay when he faced just one batter over the minimum.

By RotoRob
This entry was posted on Thursday, August 2nd, 2007 at 12:14 pm and is filed under BASEBALL, Fantasy Notes. You can follow any responses to this entry through the RSS 2.0 feed. You can skip to the end and leave a response. Pinging is currently not allowed.