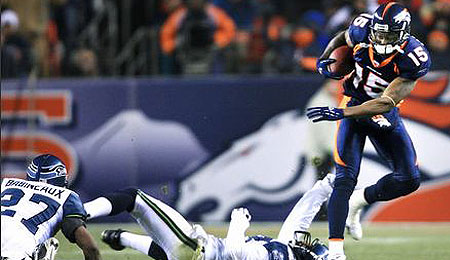 The inability of Brandon Marshall (standing) to get onto the practice field this summer has opened the door for other Bronco WRs to gain ground.

With football season around the corner – we’re now just six days from the first pre-season tilts – we thought we better check in with some pigskin prose. Here’s the latest news from the Denver Broncos training camp.

Obviously, the biggest shock Thursday was when linebacker Warrick Holdman suffered a spinal cord concussion after a collision with running back Mike Bell. It was a scary incident, with Holdman lying still for several minutes and going numb for about 30 or 40 seconds before being carted off and taken via ambulance to a local hospital for observation overnight. The fact that he was able to move his arms and legs before being carted off was certainly a good sign. Coach Shanahan said the team thinks this isn’t a serious injury and that the cart was used primarily for precautionary reasons. While this sort of injury often clears within 48 hours, it was a somber moment and definitely took the sting out of what appeared to be a good battle for starting linebacker jobs, one which seems to change daily. Eddie Moore will miss the entire season, but D.D. Lewis, Nate Webster, Louis Green and T.J. Hollowell will keep battling for LB jobs, with Holdman assumedly rejoining the mix when he is ready. Holdman, a nine-year vet, had signed with Denver as a free agent in April after spending the last two seasons with the Redskins.

The offense is currently missing WR Brandon Marshall (quad) and TE Tony Scheffler (foot). Marshall has been unable to practice at training camp yet, and this injury affected his off-season minicamps as well. He is supposed to line up opposite Javon Walker at wide receiver, but the fact that this problem is lingering could cost him a shot at his starting job. Shanahan keeps saying that Marshall needs to get on the field to keep the starting gig. It looks like at the very least, he will be unable to play in Denver’s opening pre-season game on August 13. This may offer Brandon Stokley a bigger opportunity, especially with Rod Smith struggling to recover from off-season hip surgery that could cost him the entire season. Other receivers who stand to gain here are David Kircus, Quincy Morgan and Brian Clark. Scheffler is still recovering from foot surgery, and it’s taking longer than expected, which may help open a window for Stephen Alexander.

Andre Hall, the all-time leading rusher in South Florida history, brings tremendous speed and big play potential to the table, making him a sleeper for a roster spot. Although he lacks the size of Travis Henry or Bell, Hall’s 40-yard time of 4.3 seconds is the fastest of any Bronco back, and that speed may help him sneak onto the final roster.

Henry was forced to run laps after practice – the second time he’s been punished this camp. His offense this time was going offside. He said the first time he was made to run laps was for not being behind a rope. “They see it as you’ve got to pay attention to the little things. I respect that,” he said.

Afternoon practice on Thursday was cancelled as the team already had eight players hurting and with the injuries to Holdman and Demetrin Veal (poked in the eye), Shanahan decided to forgo the second session. There will be two workouts today, the second of which is only for special teams.

Back-up quarterback Patrick Ramsey is reportedly getting more comfortable with the offense, showing better presence within the pocket and throwing more accurately. He’ll likely get plenty of action during preseason.

WR Domenik Hixson is looking good in practice. After being taken in the fourth round out of Akron last year, Hixson spent the season on the sidelines because of a broken foot. He’s been praised for his desire to learn and is really making a big-time impression on the coaching staff.

By RotoRob
This entry was posted on Friday, August 3rd, 2007 at 11:19 am and is filed under FOOTBALL. You can follow any responses to this entry through the RSS 2.0 feed. You can skip to the end and leave a response. Pinging is currently not allowed.