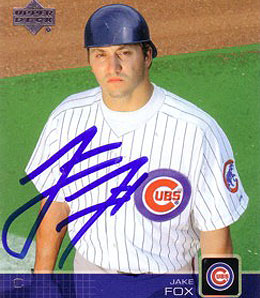 The way Jake Fox is launching moonshots this year, you better hang on to his autographed cardboard.

We’re back with a new installment of Minor Matters, this time heading down to the Double-A level, where we’ll check in on a few Cubs’ farmhands currently toiling for the Tennessee Smokies. After a strong first half in which the Smokies missed the North Division title by just one game, they are currently struggling a bit (4-6 in last 10 games), but they are very much in the race, tied for second, two games back of the division lead.

Jake Fox, C: Fox, the Cub’ third-rounder in 2003, is enjoying a breakthrough power season as one of the Southern League’s top sluggers. He’s tied for first in homers and ranks in the top five in runs, doubles, RBI and hits. An All-Star at High-A last season after slamming 16 homers with 61 RBI in 66 games before a promotion to Double-A, Fox is currently on fire, batting .341 this month after struggling in June (under .200). Fox, who turns 25 on Friday, uses all parts of the field, and although he feasts on lefties, he’s still hit a decent .264 against righties this year. I’m a bit concerned by those 71 Ks, but he’s actually whiffing less than he did during his half season at Tennessee. Small wonder the Cubs thought they could part with Michael Barrett given the progress Fox has made in recent seasons.

Gary Cates, 2B: Cates leads the Smokies in steals with 14, but having just turned 26 and been stuck at Double-A since 2002, it appears that his chances of becoming anything more than a platoon player (he’s hitting just .234 vs. righties, but .295 vs. lefties) or a utility man are non existent. In 80 games this season, he’s scored just 24 runs, has shown very little pop and horrible on-base skills. It gets worse. He was hit by a pitch last week, breaking the middle finger on his right hand, an injury that will keep him out four-to-six weeks and certainly end any slim chance he had of a promotion. A 39th round pick by the Orioles in 1999 who signed with the Cubs as a six-year minor league free agent in 2005, Cates has been horribly inconsistent this year and seems to be regressing. Something tells me this Gary Cates won’t ever usurp the Ohio Senator as the most famous person with this name.

Nate Spears, 2B: Spears’ recent hot streak (.355 in July) earned him a promotion from High-A Daytona to replace Cates. He’s only hitting .261 overall this season with one homer, 26 RBI, 44 strikeouts and four steals in 78 games, but it’s somewhat of a rebound after Spears’ horrible 2006. He’s been stalled at High-A after a strong first year at the level in 2005. Yet another former Oriole farmhand (taken in the fifth round by Baltimore in 2003), the 22-year-old was dealt to the Cubs with Carlos Perez in the Corey Patterson deal. This is his first taste of Double-A. (By the way, Patterson, who spent most of 2000 with the Cubs’ Double-A affiliate before getting fast tracked to the majors, is finally starting to awaken from his nightmare 2007. After emerging as fantasy gold by smacking 16 homers and swiping 45 bases last year, he has just four dingers and 20 thefts this season. However, Patterson is batting .340 in July with half his long balls for the year and a quarter of his steals with a couple of weeks left to play. Second-half sleeper alert. Sorry for the aside; now back to our regular programming.)

Mark Holliman, SP: Holliman, a 23-year-old righty, was taken in the third round in 2005, but didn’t make his professional debut until last year, with the Cubs starting him out at High-A. This explains why he’s already at Double-A, but Holliman certainly doesn’t look overmatched, getting selected to the Southern League All-Star game based on his 7-7, 2.94 season. He started the season looking like he was hell bent on making it to Wrigley this season, going 3-0, 0.33 in four April starts, but he’s obviously been unable to keep up that pace. Holliman, who’s been particularly tough on lefties, is doing a great job of keeping the ball in the park this year with just five homers allowed in 113 1/3 IP. This is definitely a name to track as he’s moving quickly.

Kevin Hart, SP: I was planning on writing about another Smokie in Hart, but his recent success bagged him a promotion to Triple-Iowa last week. After all, he earned Topps Southern League Player of the Month honours for June by going 4-0 in six starts with a 2.54 ERA and superb 38/8 K/BB ratio. Yet another former Orioles prospect (11th round pick in 2004, traded to the Cubs in December for Freddie Bynum), the 24-year-old righty struggled at High-A last year (6-11, 4.61), but was mostly done in by the long ball. Promoted to Double-A this season, Hart was 7-5, 4.45 through 16 starts and one relief appearance with 89 strikeouts and 99 hits allowed in 97 innings. Hart’s problems with the gopher ball resurfaced in his Triple-A debut, as he coughed up three of them in just six innings.

Sean Gallagher, SP: Another Smokie who’s been moved aggressively is Sean Gallagher, the team’s 12th round pick in 2004, who has left a wake of awards and honours in his path since turning pro. Despite the fact he’s just 21, this righty has already been a Low-A classification All-Star for his 2005 showing (14-5, 2.71 in 26 starts and 146 IP, with 10 homers allowed, 55 walks and 139 strikeouts) and a 2006 FSL All-Star Game participant after a brilliant first half in which he went 4-0, 2.30 with 75 hits allowed in 78 1/3 innings with five homers, 21 walks and 80 strikeouts. That showing earned him a promotion to Double-A, where Gallagher did not look overmatched in the least, going 7-5, 2.71 in 15 games and 86 1/3 innings, surrendering just 74 hits and four homers, striking out 91 but experiencing some control problems with 55 walks and nine wild pitches. Back at Double-A to start this season, he went 7-2, 3.39 in 11 starts and 61 innings with just 54 hits and 24 walks allowed against 54 strikeouts. The Cubs brought him up to pitch out of the bullpen on June 6, and he was optioned back to Triple-A after a few less-than-impressive major league appearances. After just two Triple-A starts, Gallagher has found himself back in Chicago, but may not been there for long with the control problems he’s having. Still, at his tender age, this kid has definitely put himself on the map with a career mark of 26-12, 2.65 heading into this season.

By RotoRob
This entry was posted on Wednesday, July 18th, 2007 at 2:20 pm and is filed under BASEBALL, Minor Matters. You can follow any responses to this entry through the RSS 2.0 feed. You can leave a response, or trackback from your own site.