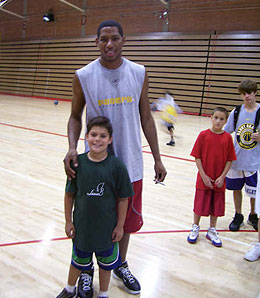 Danny Granger, posing here with James’ son Metri, talked to us about everything under the sun.

First it was Brooks Robinson, then Jay “Mr. Olympia” Cutler, and then Brad Ziegler from the A’s Triple-A team. Now, I got a chance to sit down with an up-and-coming NBA star from the Indiana Pacers, Danny Granger.

I pulled Danny aside while at his second annual basketball camp for kids aged seven to 17 and talked with him about a variety of topics, including his performance last season, what to expect for next season, and whatever else I could think of while I had him in front of me.

Let me just say that Danny was one of the best people I have got a chance to talk to so far. Not only did he take time to talk to anyone that happened to call his name out at the camp, but he was there every day to give the kids one-on-one instruction, do media interviews, sign autographs for the kids and their families. He even went out and made time to visit people in a nearby hospital. If I wasn’t already a Granger fan before this (which I was since he went to UNM and I had a class with him), I certainly would be now. With players such as Allen Iverson seeming to take over the NBA with their thug mentality and seeming to need street credit, it was really good to sit down and have an intelligent conversation with a player for once.

With the NBA already pricing the average fan out of the game, and the never-ending circus that seems to follow some players around, I think it is safe to say that Danny Granger is a role model for kids to look up to.

Below is a complete transcript of the interview.

RotoRob.com: You played the two, three and four last year. Where do you think you can be most effective as an NBA player?

Danny Granger: You know what, I really felt comfortable playing either position really, with some teams playing more small ball. I really felt I was most effective at the two because I am quick enough to guard them and I was also bigger than them on the other end.

RR: What was your favourite position to play?

RR: With Jim O’Brien taking over as head coach in Indy, how do you expect your role to change next season?

DG: I think it will increase. Last year I had a pretty good year and he is expecting me to have a breakout year this season. I think he will help me out to the best of his ability. We have a great coaching staff, and he will be looking for me to score and defend.

RR: The big trade with Golden State didn’t work out that well for the team last season as the Pacers missed the playoffs, but you personally benefited from it by becoming a starter and getting a larger role in the offense. Do you have mixed emotions about how that played out? Discuss.

DG: A little bit, you know

By James Morris
This entry was posted on Tuesday, July 17th, 2007 at 3:13 pm and is filed under BASKETBALL, Interview. You can follow any responses to this entry through the RSS 2.0 feed. Both comments and pings are currently closed.