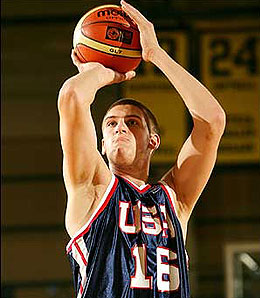 Spencer Hawes’ development is the key to a Hinrich-Felton deal.

I have an offer from a guy for Kirk Hinrich: Raymond Felton and Spencer Hawes. I have always liked Felton, but am worried about his progression. He can go off at times, but with J-Rich there will it limit his production from now on?

What are you thoughts?

I think Hawes is going to be good and he will be a guy that could see real minutes for the Kings in his rookie season with Brad Miller, Shareef Abdur-Rahim, and Kenny Thomas all on the back end of their careers. However, being a vital cog in the team’s engine doesn’t mean it will translate into fantasy numbers. I think Hawes has a good two, maybe even three seasons before you want him as your starting centre game in and game out.

I like Felton and with ‘Cats adding Richardson and re-signing Gerald Wallace, he should see some nice assist totals this season. I see the depth chart as Felton at PG, Richardson at SG, Wallace at SF, Emeka Okafor at PF/C and either Primoz Brezec or Jake Voskuhl (if they re-sign him) at C with Sean May (when healthy), Adam Morrison, Matt Carroll and Walter Herrmann as the key men off the bench.

Hinrich is on a really talented team, but he loses some minutes to Thabo Sefolosha and Chris Duhon. Rumors are floating that Duhon may be traded, so stay tuned there. But, to be able to add two players for one is a good fantasy move most of the time. And, this is the same. If you are playing for the longer term, I take Felton and Hawes. If you want to win now, I still take Hawes and Felton. I like Hawes, and Felton is not far from Hinrich in my book. If this is a keeper league I do it; if it is a redraft league I wait to see how Hawes pans out early on.

By James Morris
Tags: Kirk Hinrich
This entry was posted on Monday, July 16th, 2007 at 10:58 am and is filed under BASKETBALL, Dear RotoRob, James Morris. You can follow any responses to this entry through the RSS 2.0 feed. Both comments and pings are currently closed.