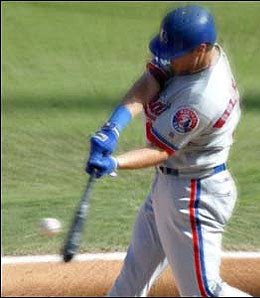 Just three weeks ago, the Rangers, at 23-42, were the worst team in baseball. Since then, they’ve gone 12-6, including nine wins in the past 13 games, to pass the Rays, Nats and Reds for that unseemly honour. Hell, they’re even beating the Angels now, hammering their nemeses 8-3 last night. Considering Texas had lost six of seven to the Halos this year by a composite score of 42-22, this is indeed progress.

Still, to put things in perspective, this team is still just 35-48, sitting 16 games back in the AL West and even 11.5 games off the pace of second place in the division – which still wouldn’t put them in the Wild Card lead.

Don’t be printing up any playoff tickets for these guys. Having said that, Texas’ recent hot play has been driven in part by great runs from some of its personnel. It’s helped produce a few names worth jumping on for fantasy purposes.

Brad Wilkerson is locked in right now– with his home run swing, at the very least. His career game Tuesday (three homers, six RBI) gives him five homers and 15 RBI over the past seven games. I guess that will do. In becoming the first ALer to hit three homers in a game this season (Alfonso Soriano and Carlos Lee have both done it in the senior circuit), Wilkerson is the 14th Ranger to accomplish the feat and first since Mark Teixeira did it last July. It’s about time Wilkerson started justifying his 18th round selection in our draft this season. Despite the power surge, Wilkerson hadn’t had a multiple-hit game since May 14, so even though he’s suddenly on pace for a career season in homers and RBI, he’s batting just .235.

At the depth of the Rangers’ struggles, Kevin Millwood – the team’s “ace” – looked about as done as he could be. Having already endured two stints on the DL, it certainly didn’t appear as though he was healthy during his first three starts after coming off the DL for a second time on June 1 – in 13 innings, he was shelled for 27 hits and 20 runs (16 earned). Millwood’s ERA was closing in on 8.00 at the time – not exactly what Texas had in mind when it shelled out $60 million for him prior to the 2006 season. However, Millwood has shown improvements in each of the last four starts, culminating in Tuesday’s season-high eight-inning effort of five hits and two runs allowed. He struck out four, walked none and retired 13 straight from the second to the sixth innings to earn his fifth win of the season. Millwood makes a superb buy-low candidate now as it looks like he’s turned the corner.

Mark Teixeira’s injury not only opened the door for Wilkerson to play first base every day, but it also has allowed Marlon Byrd to get extra time in the outfield and his amazing hot streak has forced the team to put him in the lineup daily. Traditionally a weak hitter against righties (.234 over the last three years), Byrd has gone absolutely ballistic this season, riding a near-.400 June to a .369 mark overall with a 949 OPS through 35 games and 130 at-bats. Are you kidding me? Righties? No problem. He’s batting almost .350 against them. Lefties? Bring ’em on. Byrd is battering them to the tune of .429. Byrd has cut his strikeout rate this season as he makes a statement to keep playing against righties even when Teixeira returns and forces Wilkerson back to the outfield, making at-bats scarcer to come by. At this point, he’s not slowing down either, hitting in five straight as of Tuesday. And damn, when things are going well, you even get lucky, as Byrd did leading off in the fourth inning last night when he struck out but reached base on a wild pitch.

Thanks to a boatload of supplemental picks, the Rangers owned five of the first 54 selections and wound up with 11 players in the first seven rounds of the draft. After penning third rounder Evan Reed and seventh rounder Tim Smith, Texas has now signed five of its first 11 picks. Here’s a rundown of the first half dozen picks for the Rangers:

First round (17th overall), Blake Beaven, RHP (unsigned): The team is still negotiating with its top pick, a Texas high schooler coming off a dominant season.

First round (24th overall), Michael Main, RHP/OF (signed): A two-way star that the Rangers drafted as a pitcher, Main is currently with the Arizona League Rangers, but he has yet to pitch professionally, acting only as a DH as the system gets him on a throwing program to ease his way back onto the mound. That will likely happen in the next couple of weeks.

First round sandwich (35th overall), Julio Borbon, OF (unsigned): Taken out of Tennessee, Borbon was considered the best collegiate outfielder available, but that’s not saying much this year. He has yet to sign.

First round sandwich (44th overall), Neil Ramirez, RHP (unsigned): Ramirez is mulling a scholarship to Georgia Tech and an offer from the Rangers. He and his family attended the Ranger game on the weekend, if that’s any indication of which way he’s leaning. Ramirez slipped in the draft somewhat after an inconsistent season. Prior to his senior season, he was considered one of the top high school pitchers available.

First round sandwich (54th overall), Tommy Hunter, RHP (unsigned): The fourth righty Texas snared among its first five picks. Texas is still negotiating with Hunter, who can head back to Alabama for his junior season should things not work out. Just the fourth player in Crimson Tide history to be picked with a first round or supplemental pick, Hunter wasn’t expected to be picked until the third or fourth round.

Second round (80th overall), Matt West, 3B (signed): A second-team TSWA All-State shortstop in high school, West is probably headed to the hot corner ultimately, although he’s currently playing shortstop for the AZL Rangers. BA ranked him as the 10th best corner infielder available heading into the draft. West is batting over .350 through his first five games as a pro, with five walks to his credit already.

By RotoRob
This entry was posted on Wednesday, July 4th, 2007 at 2:33 pm and is filed under BASEBALL, Team report. You can follow any responses to this entry through the RSS 2.0 feed. You can skip to the end and leave a response. Pinging is currently not allowed.