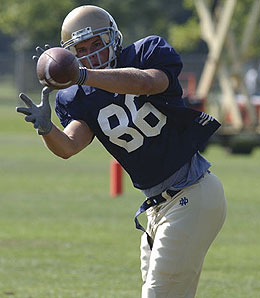 Chicago Bears draft pick Greg Olsen was originally ticketed for Notre Dame before winding up starring with the Hurricanes.

One of the men who brought you Miami’s infamous 7th Floor Crew, lands in Chicago as one of the Bears’ newest offensive weapons.

While Greg Olsen will never elicit comparisons to Jay-Z, the Notorious B.I.G., Tupac, 50-Cent, Grandmaster Mele Mel, the Daddy or anyone else skillful in the rap world, the man played a mean tight end at the University of Miami. However, can “G-Reg” (as his 7th Floor peeps called him) breathe life into a one-dimensional Chicago passing game?

Despite Olsen’s athletic ability, that 500-pound anvil hovering over his head is none other than Rex Grossman. Olsen is no stranger to playing with a quarterback of questionable ability though (see U of M’s Kyle Wright). He’ll attempt to make the best of a strained quarterback situation in the Windy City.

From an attributes standpoint, Olsen is more Jeremy Shockeythan Vernon Davis if you’re looking for an NFL comparison. He does not possess the same freakish ability of Davis but he’ll find ways to run respectable routes and get open. He lacks the explosiveness of previous first round tight ends we have seen come down the block in the last few seasons. Nonetheless, he owns a pair of solid hands and will need to maintain sharper focus than he did at times while at Miami.

During the 2006 season with the Hurricanes, Olsen only caught one touchdown. Further compounding problems for the Miami offense over the past two seasons was Olsen’s lack of productivity on third down. He converted only seven of 30 third down situations since the ’05 season. Considering how the Bears operate with the passing game, producing on third downs and being a factor in the red zone is probably what Chicago’s brass has in mind for the 6’4″, 252-pound native of Wayne, New Jersey.

Making things tougher for him will be veteran Desmond Clark, who caught 45 passes and hauled in six touchdowns in 2006. Olsen will attempt to earn chances in an offense where he’ll have to fend off the vastly experienced Clark, overcome a stagnant Bears passing attack that only seems to thrive when throwing deep to Bernard Berrian, and come to grips with that fact that Chicago is a predominately run-first team.

Those factors equal a tough first year for Olsen who may be best suited for a touchdown-only league. Don’t worry though, fantasy football fans. If the Bears get back to the Super Bowl again, maybe he can bring his rap acumen to the table so they can produce the long awaited sequel to the Super Bowl Shuffle.

By Derek Jones
Tags: Chicago Bears, Greg Olsen, Notre Dame
This entry was posted on Tuesday, July 3rd, 2007 at 2:12 pm and is filed under Draft report, FOOTBALL. You can follow any responses to this entry through the RSS 2.0 feed. Both comments and pings are currently closed.