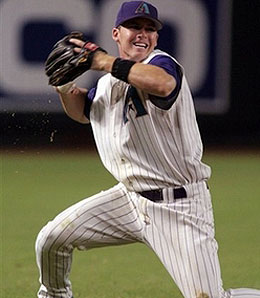 While Stephen Drew’s D has been stellar all year, it looks like his bat is finally waking up.

Azsportshub.com has checked in with its latest Diamondbacks Report, and we’ve got the highlights, with our own spin:

After grabbing first place for two days, the D-Backs are slipping with just three wins in their past 10 games to fall to third in the NL West, just five games up on the fourth-place Rockies. Dropping three of four to the Dodgers last week really hurt. The club remains on the road (where they’ve fared much better than last season) until the break, after which they have a huge series at home against NL West co-leader San Diego.

Enrique Gonzalez, as we expected, was ripped for four hits and four runs – three earned – in two innings in his season debut against the Rays. He was immediately sent back down to Triple-A Tucson and has not fared well since his demotion, losing two out of three starts and giving up 29 hits in 16 1/3 innings. At this rate, Gonzalez is not helping to set himself up as a starting candidate in Arizona.

Speaking of the Rays, Arizona’s expansion counterpart, the D-Backs had been 0-7 against TB before rallying from an 8-2 deficit and taking the final two games of their series last month. What’s up with that? Still, Arizona has nothing to be ashamed about when comparing the franchises’ records since joining the majors.

Since June 18, Stephen Drew is 16-for-54 (.296) with five multi-hit games including two straight. Is this the start of the long-awaited turnaround? If so, Drew becomes an excellent player to target for the second half.

Doug Davis was at his worst on June 19, and despite a middling victory, he’s been downright horrid over his last three starts. Try 26 hits, 13 runs and nine walks over his last 16 innings horrid. He walked six in his last start to pad his NL leading total of 54 walks. We’ve been slagging Davis for some time, so kudos to those of you that sold high before his ugly June.

Tony Clark’s pinch-hit two-run homer tied the game and took Davis off the hook for the loss on the 19th. The following day, Tony “the ex Tiger” had two hits. Since then, he’s 0-for-14, slipping to .215. After a .261 April with four homers and 10 RBI, Clark has been mostly useless. At any rate, he hasn’t been worthy of fantasy attention for a couple of years now.

Chris Young followed Clark’s heroics with a walk off dinger in the 10th to cap a 3-for-6 night. Unfortunately, that big game has been a blip in an otherwise lengthy slump for Young, who is batting just .184 since the end of May. We recommended him back in May, but his strikeout rate has risen steadily throughout the season. Young is a nice power-speed bet and he’s been driving in runs, but his contact rates are starting to worry me.

Eric Byrnes, who also enjoyed a three-hit game that night, and followed that up with a four-hit showing the next night, has been virtually unstoppable lately. In fact, just once since June 15 has he not recorded at least one hit in a game, putting up six multi-hit efforts over this stretch. Byrnes hasn’t gone yard since June 26, but he hit three in a six-game span that week. Did I mention that he’s in the top 10 in the NL in steals? Talk about a career year. However, Byrnes was snubbed for the All-Star game. He probably deserved the nod over Aaron Rowand, but you could make a case for either player. To be honest, Hunter Pence probably should have made it over both of them.

Chad Tracy has been in a batting slump, but it hasn’t affected his power: three homers and 10 RBI over the past 14 games. Tracy’s been pretty steady defensively this year, but he committed two errors on June 22, providing us with some shades of 2006 when he was charged with 26 boners – 25 at the hot corner.

Tracy’s D sure didn’t help Brandon Webb, a victim of three second-inning errors and four unearned runs in all that night. Webb bounced back with seven huge innings of shutout ball against the Dodgers, but was then slapped around by the Cards. No wonder he had to rely on fan voting for his crack at the All-Star game, and that isn’t exactly working to his favour – Webb is dead last in voting among the five candidates for the final NL All-Star spot.

Arizona is seeking ways to keep Mark Reynolds around, playing him for a couple of innings in right field on the weekend. It doesn’t sound like this plan is going to gain much traction, though. He came through with a huge two-run triple to help key a massive rally in the June 23rd win against the O’s, but with his last multiple hit game coming on May 30, I’d say the party’s been over for a while. At this point, Reynolds is not much more than a power bat off the bench, and considering Arizona already has one of those (Clark) and that we’re talking about a 23-year-old kid who should be developing his game by playing every day, I’m not sure what the D-Backs are thinking by keeping him around.

Brandon Lyon had been on a roll with seven straight scoreless outings before blowing it for the Snakes Wednesday night. I’m still highly unimpressed with his 20 strikeouts in 41 innings, but his overall numbers are strong.

Still with the pen, Randy Choate got called up to help out in the Dodger series but when he surrendered hits to all three batters he faced, he was DFAed. See ya.

With Randy Johnson landing back on the DL because of his herniated disk, you’re not alone in beginning to question the intelligence of penning him to that two-year extension after the trade from New York.

Orlando Hudson and Jose Valverde did make the all-star team for the NL. Valverde’s selection was no shock, but it was somewhat surprising to see Hudson beat out – deservedly so — some fierce competition among NL second basemen (Brandon Phillips, Jeff Kent and Dan Uggla, for instance). No, Hudson’s name is not peppered on the leader board, but he’s batting .300 and is enjoying a career year, not to mention what he brings to the table defensively. With hits in 11 of his last 12 games, Hudson isn’t exactly slowing down, either.

By RotoRob
Tags: Arizona Diamondbacks
This entry was posted on Thursday, July 5th, 2007 at 12:36 pm and is filed under BASEBALL, RotoRob correspondent report, Team report. You can follow any responses to this entry through the RSS 2.0 feed. Both comments and pings are currently closed.