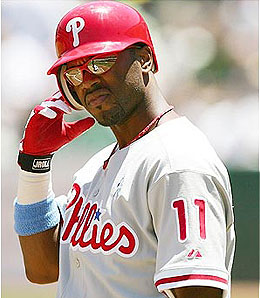 J-Roll’s two-run jack Sunday didn’t necessarily end his slump, but it came at just the right time for the desperate Phillies.

With Independence Day just a couple of days away, what better a time to turn our attention to Philadelphia and take a look at how some of the Phillies are performing.

Jimmy Rollins broke a slump Sunday as the Phillies avoided a sweep against the surging Mets. Philly headed into this pivotal series just three games back, with a glorious opportunity to make up some ground and perhaps even overtake the Mets, but with just one win in four tries, it has now fallen five off the pace in the NL East. Rollins had been just 1-for-14 in the series before cranking his 14th homer to give the Phils a two-run lead. Given that this was J-Roll’s only hit of the night, he’s still just two for his last 15, so I wouldn’t say he’s out of his slump just yet. Did you catch him stewing on the field after a key error on Saturday, unwilling to join his teammates during a mound meeting? Nice. Still, Rollins is enjoying another tremendous fantasy season with 44 extra-base hits, having already hit the triple double mark, as in double figures in doubles, triples and home runs – for the fifth time in his career. He leads the NL with 66 runs and is in the top 10 in steals, headed for a sixth 30-SB campaign. We ranked him second among shortstops back in May, and he hasn’t really done anything to hurt himself in that regard.

Kyle Kendrick continues to not only hold his own since his recall from Double-A last month, but he remains undefeated through four starts. He managed to last a career-high 6 2/3 innings Sunday, giving up six hits and just two runs. Kendrick’s command has been shaky, but he’s taken on three straight good offenses (Cleveland, Cincy, the Mets) and is giving up under a hit per inning – not too shabby for a 22-year-old in his first taste of the bigs. Sure, Kendrick was helped by three double plays Sunday, but he showed resiliency, succeeding against the Mets where fellow youngster J.D. Durbin and J.A. Happ failed. This kid is starting to show up on the radar in terms of waiver wire choices.

Shane Victorino also snapped a slump Sunday. Stuck in a 1-for-16 rut that had dropped him to .265, Victorino broke out with three hits – including his ninth homer – and two steals. With 25 swipes already – third best in the NL – it looks like we were being conservative with our estimates back at the start of the season. Victorino, finally given a chance to play everyday, also ranks 10th in runs. Power is not his game, but he’s become a more patient hitter this season – always a good quality for a two-hole man.

This is a team with a pitching staff that’s been beset by health woes, hence the appearance of those three kids who were all in the minors just three weeks ago. Starters Freddy Garcia (an 11th round pick in our pre-season draft) and Jon Lieber are out, and among the bullpen, closer Tom Gordon, his replacement Brett Myers and Francisco Rosario are also on the DL. Garcia may be done for the season and Lieber (who had a middling season last year) won’t be back until late-August at the earliest. Gordon should be back shortly, but Myers, who had to cut short his bullpen session on Tuesday, will likely remain out for another couple of weeks because of his shoulder woes. We discussed back in April how Myers might emerge as valuable by taking Gordon’s job, something that happened briefly before Myers succumbed to his own injury.

In the absence of Gordon and Myers, Antonio Alfonseca has managed to get the job done, going 1-0 with six saves in seven tries and a 1.50 ERA for 13 appearances since Myers landed on the DL.

The bullpen has also received a boost from J.C. Romero, released by the BoSox a couple of weeks ago and scooped up by Philly. Romero had an artificially low ERA in Boston (his WHIP was scary), but so far, so good in his first taste of the NL. Romero has tossed three straight scoreless outings for the Phils, and he chalked up his first hold on Sunday.

The injuries have also necessitated the promotions of Mike Zagurski in May and Brian Sanches last month. Each are contributing with Zagurski showing good command and Sanches hurling three straight shutout appearances.

Aaron Rowand has slowed down since his torrid April (1084 OPS), but he’s remained steady and is enjoying his finest season since 2004, ranking 11th in NL hitting. Over the past few games, he’s just 3-for-14, but considering he’s headed for career bests in runs and RBI and is on pace to reach double digits in steals for the fourth straight season, we’re talking about a player who should be owned in virtually every league.

Pat Burrell, who we wrote off as horrible back in May — given the recent trade offers I’ve received that have included Pat the (not so good) Bat in recent days, he must officially suck – managed to draw two walks and score a run Sunday. He’s mired in a 4-for-43 slump since June 8, and his .129 June (which followed a .179 May) has him down to .201 for the year. Burrell has actually cut down his strikeout rate this season and thanks to his 56 walks (third highest in the NL), he maintains some value in OBP leagues (.369), but if that’s not a factor in your league, there’s really nothing to see here.

By RotoRob
This entry was posted on Monday, July 2nd, 2007 at 2:41 pm and is filed under BASEBALL, Team report. You can follow any responses to this entry through the RSS 2.0 feed. You can skip to the end and leave a response. Pinging is currently not allowed.