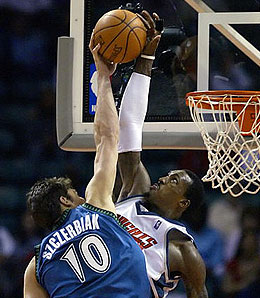 Blocking shots, like this rejection of a Wally World attempt, is just one of the many skills Gerald Wallace offers that will make him one of the most desirious free agents this year.

Today marks the opening of the NBA free agency period and while there may not be any bona fide superstars available, several key players are hitting the market.

Vince Carter, Rashard Lewis and Chauncey Billups are considered the three biggest prizes this season, but the name that intrigues me the most because of what he can bring to the table is Gerald Wallace, especially considering that VC and Mr. Big Shot aren’t expected to be headed anywhere but back to their old teams.

“Crash,” as Wallace is known because of the reckless abandon he brings to the court, is not only a serious stud with across-the-board skills, but he doesn’t turn 25 until later this month, making him a valuable commodity for years to come.

Wallace has foregone a guaranteed salary of $6 million for 2007-08 from the Charlotte Bobcats to see what he can fetch on the open market as an unrestricted free agent. Considering most expect him to be able to land a deal worth at least $10 million per year, it’s a smart move.

Charlotte is hell bent for leather to re-sign him, and will meet with his agent today to talk about what it’s going to take to make that happen. Of course, this is just one of many decisions facing the team this offseason, as we discussed just over a month ago.

But the Bobcats are going to have competition in trying to secure Wallace’s services – probably plenty of it, and given that the latest word is that he’s put his house in Charlotte up on the market, they will have to do one hell of a pitch to get Crash back.

Fans of the Warriors are pushing for their team to make a run at him, and early indications are they might use their trade exception to try to land Wallace. Dallas has also entered the picture as a major player in this sweepstakes. Orlando may also take a run at Wallace.

Although he slipped in some departments from his breakout 2005-06 campaign, Wallace enjoyed a career year last season, especially offensively as he paced the ‘Cats with 18.1 PPG. His rebounding dropped slightly, but he was still the second best rebounder on the club.

An original Bobcat, he was plucked in the 2004 expansion draft after three seasons as a reserve with the Kings, with whom he saw very little action.

Toiling in relative obscurity in Charlotte, Wallace isn’t exactly a household name, but he’s certainly about to break the bank as if he were one. The question is, is Wallace worth $10 million or more per season?

Well, he’s certainly improved offensively since landing in Charlotte, jacking his PPG total in each season, from 11.1 in 2004-05 to over 15 in 2005-06 to 18.1 last season. He may not be a 20-10 man, but he’s pretty darn close. And throw in what Wallace brings in steals and blocks, and you’ve got yourself one hell of a player – especially from a fantasy perspective.

Wallace has endured his share of injuries in recent years, definitely a result of his no-holds-barred play, but he remained relatively healthy this season, setting a career high with 72 games played. He also enjoyed career bests in MPG, APG (2.6) and double-doubles (16). Wallace’s perimeter game developed somewhat (32.5 per cent with 39 three-pointers made), he improved his FT shooting – traditionally his weakness – to 69.1 per cent. While he slipped from 2.5 steals and 2.1 blocks in 05-06 to 2.0 and 1.0 last year, 2006-07 still marked the best overall season of Crash’s career.

If the ‘Cats can retain Crash – and, as discussed, they plan to do their darndest to make it happen – they’ll have a solid, young team with a great chance of making the playoffs for the first time in franchise history.

Put Wallace alongside Emeka Okafor, Sean May, Raymond Felton and the just-acquired Jason Richardson and you’ve got yourself one serious starting five. Crash playing alongside J-Rich could present some major matchup issues for opponents.

The bench — with Walter Herrmann, Matt Carroll (assuming he re-signs), first round pick Jared Dudley and last year’s top choice, Adam Morrison, who should be much better after a somewhat disappointing rookie season – is pretty impressive as well. In a weak Eastern Conference, this team could make some serious gains.

Step one, of course, will be getting Crash back in the fold.

By RotoRob
Tags: Charlotte Bobcats
This entry was posted on Sunday, July 1st, 2007 at 11:10 am and is filed under BASKETBALL, Player profile. You can follow any responses to this entry through the RSS 2.0 feed. Both comments and pings are currently closed.