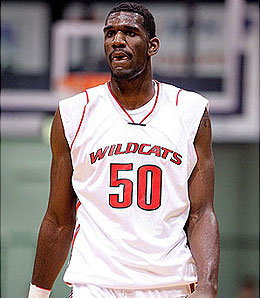 Picking up Greg Oden is a good way to fix your frontcourt issues.

How’s it going? Thanks for all the advice in advance. Love the site and the columns.

Hey, I had a question about our upcoming rookie basketball draft. Somehow I lucked out with some good trading and bad, but ended up with the top two picks in our rookie draft. It’s a keeper league, 20-man roster and five-man rookie roster. I, of course, will be drafting Greg Oden and Kevin Durant.

I would assume that will help shore up my big man cats for awhile along with my current lineup of Chris Bosh and Andrew Bogut. My question is one of the guys is trying to move Charlie Villaneuva from Milwaukee. He is asking for something like a pick in the 20s and a pick in the 30s. I have the No. 22 and 30 picks so I was thinking of offering those to him for Villanueva.

What do you think of the prospects of Charlie? I know he was hurt last year, but I think he would be better than any guys that I could get with the 22nd or 30th picks. What do you predict for Villanueva stats-wise for next year? Can he, Bogut and the Bucks’ future pick coincide and mesh together to get me some good fantasy stats for Charlie?

Remember I also have Bogut, so I worry too much about them canceling each other out. Oh, and I am targeting Rodney Stuckey or Javaris Crittenton with my No. 16 pick. I have Stephon Marbury, Kirk Hinrich, Randy Foye, Jameer Nelson, Jordan Farmar and Jose Calderon. I like Hinrich, Foye and Nelson for next year and hope that Calderon might get moved, which would open up his playing time.

I think it was Rob who wrote:

‘Milwaukee Journal-Sentinel columnist Michael Hunt writes that the Bucks will again be seeking a power forward for next season. Hunt suggests that Charlie Villanueva, who struggled through an injury-riddled season, is not the answer. Milwaukee may make a run at impending free agent Gerald Wallace, he writes, and if he’s right, Charlie V may not be a player worth targeting next season. The T.J. Ford-Villanueva deal sure has backfired for Milwaukee.”

And, I tend to agree with the columnist. I don’t see Villanueva as being the answer at PF and he just doesn’t really look all that good when he is healthy. He is too erratic with his stats. Whenever a guy is “looking” to move a player in a keeper league I always look at picking him up, but I wonder why too. I mean it is a keeper league so if he was going to get better, why would you be dumping him now?

Is he going to be better than who you get with those picks? Possibly. But, if they go after a forward in free agency or in the draft, Charlie V’s value takes a major hit [Milwaukee drafted Yi Jianlian, who will compete directly with Villanueva for the four spot — assuming he decides to play for the Bucks, that is]. I would wait and see what happens with the team and their search for frontcourt help.

By James Morris
This entry was posted on Saturday, June 30th, 2007 at 12:10 pm and is filed under BASKETBALL, Dear RotoRob, James Morris. You can follow any responses to this entry through the RSS 2.0 feed. You can skip to the end and leave a response. Pinging is currently not allowed.