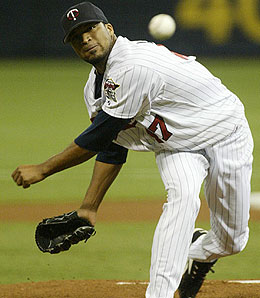 Could Matt Garza make the kind of impact that Francisco Liriano, above, made last season? James thinks it’s possible.

I don’t know if anyone besides me noticed but Matt Garza is being called up and will come out of the pen until he is needed to start on July 6. Did you notice? Nobody in my leagues had a chance because I couldn’t drop someone fast enough to pick him up!

Matt Garza, SP, MIN: The kid is a freaking stud and the only reason he isn’t in the rotation now is because he just started on Tuesday for Triple-A Rochester. Garza will be in the rotation and make the same type of impact that Francisco Liriano made. He may not be the same quality of Liriano, but he isn’t all that far from it. Get him now.

Jason Bartlett, SS, MIN: In his last 27 ABs, Bartlett is 9-for-27 (.333 BA) with five runs, one home run, six RBI, and six steals. I’m not sure he is going to be someone to take longer term, but play the player who is hot. Bartlett’s hot play has resulted in more pine time for Nick Punto recently, so if you need help at SS, give Bartlett a look.

Shannon Stewart, OF, OAK: I hate taking on part-time players for fantasy leagues, but Stewart isn’t a bad fourth OF option. Over the past month, he’s batting .339 BA with 12 runs, four home runs, eight RBI, and has added two steals to the mix. He won’t help much outside of BA and maybe some runs and the occasional knock, but for a reserve OF, he is someone that needs to be on your radar.

By James Morris
This entry was posted on Saturday, June 30th, 2007 at 4:42 pm and is filed under BASEBALL, James Morris, The Wire Troll. You can follow any responses to this entry through the RSS 2.0 feed. You can leave a response, or trackback from your own site.