Shuffling off from Buffalo? 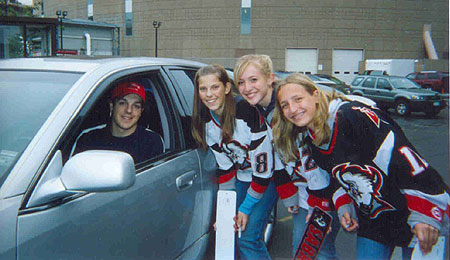 Nothing turns us on like a buffalo emblazoned across a beauty’s breasts. And Daniel Briere wants to leave this?

Apparently, the management of the Buffalo Sabres was absent the day the universally-understood maxim “if you snooze, you lose” was taught in school.

How else do you explain the fact that they dragged their heels for six weeks before offering their co-captain and best player an offer?

Small wonder then, that Daniel Briere is almost certainly headed to the open market when the NHL free agency period starts on Sunday.

Coming off a career season in which he shattered personal bests almost across the board, the 28-year-old centre was finally tendered an offer by the Sabres yesterday, reported to be in the five-year, $25-million range.

It was certainly no big surprise that Briere said ‘thanks, but no thanks.’ After all, he and his agent believe he’ll command a six-year deal worth $36 million as a free agent. Considering Buffalo waited until three days before the deadline before floating its offer had to make this a much easier call for the Briere camp.

If Buffalo was serious about keeping Briere, why didn’t it offer him a deal like this during the season, or at least right after the playoffs ended? Apparently, the team’s policy is to not negotiate during the season. Now, it may cost them.

Once Briere crossed that threshold on July 1, the Sabres will lose exclusive negotiating rights with their leading scorer. So if Buffalo legitimately wants to retain the 95-point man, it better pony up this weekend. And considering the gulf between the parties, it doesn’t seem likely that they will be able to come to an agreement before Briere can walk.

Can the Sabres afford to let Briere leave? This team is brimming with offensive talent, and could be one of the few clubs in the league that could withstand a loss of this magnitude. Rookie Drew Stafford, the team’s first rounder in 2004, emerged as a viable offensive threat with 27 points in 41 games. Don’t forget Tim Connolly will be healthy, and he was almost a point per game man before post concussion syndrome wiped out his 2006-07 season.

Briere has maintained all along that he’d remain in Buffalo if he was given what he deemed a reasonable offer. He said he wouldn’t be hard to sign. Obviously, his camp doesn’t believe this qualifies as reasonable, and they may be justified considering many people view it as a token offer. Briere and his agent haven’t ruled out re-signing with the Sabres, but the prospects of that happening appear slim.

If Briere does leave, Buffalo may be forced to pony up big time to keep unrestricted free agent Chris Drury, a player the Sabres are currently negotiating with, according to reports. Hopefully the team doesn’t overpay Drury in an effort to keep at least one of its key free agents. After lasting five games in the Conference Final this year, this team has a legitimate chance to win the Stanley Cup ‘ but has to avoid handcuffing itself with bad contracts, especially considering they may have cap space issues this summer. Having said that, if they are serious about taking a run at the Cup, they will need to spend whatever money they had earmarked for Briere.

Dainius Zubrus, who added some size to the Sabres’ forward ranks after arriving in a deal from Washington, is also an UFA. Among the forwards who are restricted free agents are Thomas Vanek and Derek Roy. It’s looking more likely that Buffalo will do what it has to do to keep Drury, re-sign Vanek, possibly re-sign Zubrus (although that looks like a long shot), and perhaps still have some money left to bring in someone else, maybe a defenseman with toughness.

This is Briere’s first crack at being an unrestricted free agent, and despite suggesting otherwise, it looks like that is a direction the All-Star game MVP wants to head in. Colorado, Philadelphia and Montreal are possible suitors, with the Flyers looking like they may push the hardest.

Perhaps the Sabres decided that three goals in 16 playoff games wasn’t exactly what they needed and they plan to sink that money into one of the other big free agents on the market (Sheldon Souray?).

By RotoRob
This entry was posted on Friday, June 29th, 2007 at 10:09 am and is filed under HOCKEY, RotoRob, Team report. You can follow any responses to this entry through the RSS 2.0 feed. You can skip to the end and leave a response. Pinging is currently not allowed.