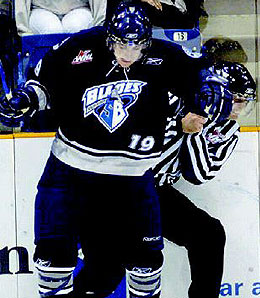 The Flyers surprised many when they selected Garrett Klotz in the third round, but perhaps they were attracted by his ability to rub out referees.

Editor’s note: Special thanks to draft expert Rob Reath for supplying us with his analysis of the Philadelphia Flyers’ picks from this weekend’s draft. Rob will be back tomorrow with more draft analysis when he reviews the winners and losers of the 2007 NHL Draft.

James vanRiemsdyk is a big, fast skating forward who reminds many of a budding John Leclair. While there have been questions about his natural aggressiveness and his choices in terms of competition, it’s hard to deny he has the enviable qualities of producing in big games when everything is on the line. vanRiemsdyk’s performances in international play have been stellar, and — unfortunately for his competition — he is still growing. He does drive hard to the net, but I think the label of power forward may be inaccurate. James is a skill player with a big frame which is similar, but I see him more as the player who comes on during the power play or penalty kill after the power forward has been sent to the box, and scores the big goal to put his team ahead.

In one of the quietest trades of the draft, the Flyers moved up and acquired a second round pick that had been the property of four different teams. In exchange for a couple of picks, the Flyers were proud to select Marshall; a player that earned the approval of the entire scouting staff from Philly. Marshall offers a lot to like in a hockey player: He brings a competitive streak like few others, he has fought with teammates in the past, he is a supreme agitator, he will fight and loves to hit and he excels at the one-on-one game. Marshall?s stickhandling is weak, yet he can move the puck well enough to make that crucial first pass to an open forward. His coaches love having him on their teams and hate having him as an opponent.

Marshall cited his play as fitting Philadelphia’s style because he plays a rough game. His defensive skills should not be overlooked either; he is remarkably steady in his own end and — while not flashy — his stability may have been the very quality that prompted Philly to deal for him. Marshall patterns his game after Chris Chelios.

Many people were baffled at General Manager Paul Holmgren’s choice of Klotz with the 66th pick overall. Klotz was not even on most scouts? radar after scoring only four points all year at he left wing position. Still, it’s an exaggeration to call him unskilled. Klotz is an enormous physical specimen at 6’6? and 225 pounds. Despite this size, he skates hard and knows how to keep himself in motion, although he does need to work on his turning and overall mobility. Klotz also added a new dimension to his game this year by playing the role of heavyweight scrapper for his team. It was in this category that he drew the most attention. Holmgren likes Klotz?s skating and sees room for development in the rest of his overall game. I’ve seen Klotz fight and he can more than hold his own with anyone. While Holmgren’s ability to judge talent is indisputable, this player is a project for certain, and it’s hard to believe he wouldn’t have been available in the next few rounds.

What an intriguing pick! Kempe is a very special player who has some spectacular traits along with a few areas of concern. First, his strengths: Skating, agility and scoring touch. This kid can wheel with the best of them, often going coast to coast with speed bursts that other players only wish they had. Kempe is also very crafty with puck, swaying it back and forth in a side to side fashion that, when combined with the swiveling of his hips, can leave defenders confused, and then it’s too late. He is driving along the wall in top gear and they can only turn and watch him go hard at the net with a late move on the goalie that reminds me of a young Pavel Bure. Kempe is extremely agile and can spin around on his skates and continue to skate backwards after a battle in the corner retrieve the puck, turning a lost situation into a breakaway. The breakaway, by the way, is his forte; he is just deadly on in that situation.

So what’s not to like? Kempe desperately needs to use his teammates better. He has the passing skills, but rarely uses them unless he been taken out of the play altogether.?Kempe is not easy to hit because of his waterbug-like shiftiness, but when he is hit, he gets taken out of the play completely and he lacks the size to contend with the big hits that come his way so often. All in all he is a very intriguing pick and well worth keeping an eye on.

Kalinsky is good player that plays with a lot courage, speed and purpose to his game. He excels on the penalty killing unit and can chip in on the power play as well. He hasn’t put up the sort of numbers that will dazzle anyone, but he offers plenty of intangibles and has an outside chance at becoming a special teams? expert. Kalinsky is a medium-sized player that can boast that he’s someone that people often take note of and enjoy watching compete.

If the purpose of every draft is to find a gem — a diamond in the rough — then there is a chance the Flyers may have struck gold in Patrick Maroon, the player nobody wanted in last year?s draft. It is amazing how much a change in eating habits can affect some players. Maroon shed 20 pounds and now stands at an impressive 6’4? and 225 pounds. Playing in the NAHL, his competition may not have been the best available, but the changes in production for Maroon were outstanding. He scored 40 goals and 55 assists in 57 games while racking up 155 PM in the process.

Maroon also led his team to the Robertson Cup. If Holmgren was on a quest to find the great American power winger in this year?s draft, there is definitely all kinds of potential in Maroon. He has a choice between Ferris State and playing for the Hunter brothers in London of the OHL and is believed to be leaning towards Ferris St.

The Flyers rounded out their draft this year with a thin goaltender. Much has been made of Phillips? slender build and that he can be pushed around in his crease as varying reports of his weight suggest he?s anywhere from 143 pounds to 161 pounds while standing 6’1?. None of these overreactions stood in his way from being named goaltender of the tournament at the Under 17 World Championship, nor did they prohibit him from posting a .913 save percentage along with a 2.33 goals against per game average. So maybe everybody needs to stop worrying about his weight and focus on his abilities.?I am confident that by the time he comes back from the Universtiy of Notre Dame he will have put on a pound or three and then everyone will be talking about his play instead. This is a good late, late round grab by Philly.

By RotoRob
This entry was posted on Sunday, June 24th, 2007 at 5:42 pm and is filed under Draft report, HOCKEY, RotoRob, RotoRob correspondent report. You can follow any responses to this entry through the RSS 2.0 feed. You can skip to the end and leave a response. Pinging is currently not allowed.