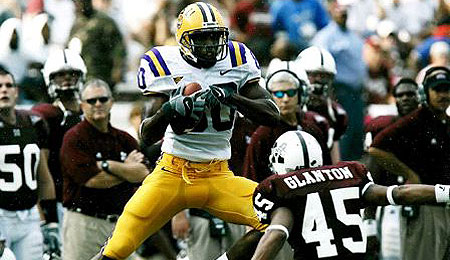 Even though he doesn’t have much competition, don’t be looking for Craig Davis to earn his bolts right away in San Diego.

It would have been easy for Craig Davis to go somewhat under the radar in the 2007 draft thanks to his teammates, quarterback JaMarcus Russell and wide out Dwayne Bowe both being surefire first rounders. Fortunately for ‘Buster,’ the San Diego Chargers didn’t miss his 56 catches, 836 yards, and four touchdowns in 2006. They took Davis with the 30th overall pick and will probably get, if nothing else, a player with a chance to break into the starting lineup sooner rather than later. That is, of course, unless Eric Parker stops acting like Samie Parker.

Davis’ game is very rough around the edges. He’s not the greatest route runner, which will neuter any chance for fantasy success this year. Another mark against him is that as the goal-line approaches, he becomes less and less of a factor. That being said, the guy did this, which is pretty cool. As you can see in the video, he has quicks, hands, and looks good when dramatic music is played in the background. But let’s be honest, you and I would do a lot better in life if we had this kind of soundtrack following us around. We’d finally get some respect. It’s also possible I’m the only person worried about this.

As I alluded to earlier, his ability to fit into the Chargers scheme will ultimately determine Davis’ long term success. There’s no crafty vet to teach this rookie the ropes. In fact, Bowe would take more pressure off of Davis in the NFL than the guys that the Chargers have now. On the flip side, Davis’ trek up the depth chart isn’t exactly climbing Mount Kilimanjaro. If he averages three and a half catches per game, he’ll be eons ahead of the aforementioned Parker (either of the Parkers, actually).

Okay, now it’s the time where the doctor (me) puts down the pen (the first three paragraphs) and gives you the diagnosis (the diagnosis). Davis will have no fantasy impact for the first 22 or 23 games of his career. At this point, he’ll either start to pick up the style and speed of the NFL game or completely fall off the fantasy map. Obviously, in redraft leagues, you shouldn’t even consider this LSU Tiger. I personally wouldn’t worry too much about him in dynasty leagues either, as guys like this tend to end up back on the waiver wire early in their second season (or maybe even earlier).

But at least there’s a dramatic YouTube video of the guy. That’s more than I can say for myself. Waaaa!

[Note from the editor: RotoRob is, in fact, working on a YouTube video of Andy that depicts him working feverishly away, set to the classic sounds of Abba’s “Dancing Queen.”]

By Andy Goldstein
This entry was posted on Saturday, June 23rd, 2007 at 12:40 pm and is filed under Andy Goldstein, Draft report, FOOTBALL. You can follow any responses to this entry through the RSS 2.0 feed. You can leave a response, or trackback from your own site.