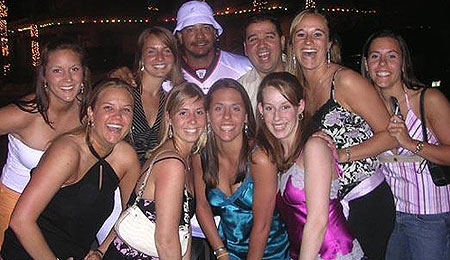 If his legions of adoring hotties are included, you’ve got to take the side of the deal that includes Manny.

I have been offered Prince Fielder, Aramis Ramirez and Manny Ramirez for Dice K, Big Papi and Lance Berkman. It’s a H2H league and all things equal, which three players would you prefer to have going forward?

Thanks for your insight.

All things aren’t equal, though. You have two first basemen, a third baseman, and a SP involved. However, if you just mean from a simple statistics point of view, I would take the Fielder/Manny/Aramis group.

Berkman has been horrible this season and better turn it around here pretty quickly or his 2007 is going to be a fantasy wash. Papi is Papi and I would love him.

Basically, I don’t think much of Dice K from what I’ve seen so far, Berkman is starting to lose my confidence this season, and the three guys you get have better fantasy numbers than the three you give. Your trade partner is hoping that these guys come around in the second half. Maybe they do that, but then again, maybe they don’t. Based on what I see now, I trade Berkman, Dice K and Papi for Fielder, Aramis and Man-Ram.

By James Morris
This entry was posted on Friday, June 22nd, 2007 at 3:36 pm and is filed under BASEBALL, Dear RotoRob, James Morris. You can follow any responses to this entry through the RSS 2.0 feed. You can leave a response, or trackback from your own site.