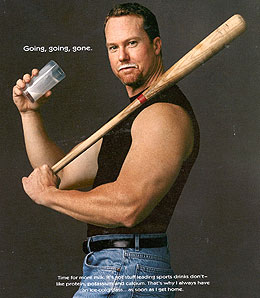 James wonders where ethics come into play when using fantasy players like the retired Mark McGwire, who apparently relied on more than milk to launch his moonshots.

Well, Sammy Sosa hit home run No. 600 and he’s currently on the waiver wires for most of my leagues. So, do you go pick him up or take a chance on someone else? Do ethics come into play with fantasy sports or do you take the best available? I wouldn’t care if Barry Bonds went to the batter’s box with an IV hooked up dripping out steroids through a garden hose. Of course, that’s the fantasy player in me. The baseball fan is disgusted and hates Bonds, Sosa, Mark McGwire and every other alleged cheater that may have used steroids to enhance their performance in sports. Now that I’ve got that out, let’s get to why you clicked on the page.

Yovani Gallardo, SP, MIL: Not that he is going to be available in many leagues, but if he is I would run — not walk — run to the waiver wire and snatch him right up. I have him in about 12 of my 20 leagues. This rookie is already one of the Brewers top five starters at the age of 21. The kid if straight up filthy.

Cristian Guzman, SS, WAS: One of our readers asked me a question about Guzman and I was forced to look at him for the first time since 2001. I was a little surprised to see that he has been pretty hot over the last month. He is 39-for-108 for a .361 BA, 23 runs scored, one home run, 10 RBI, and one SB, which means if you didn’t get one of the big shortstops in the draft, you will have to keep on the look out for the hot guy every few weeks. Guzman will probably stop hitting pretty soon, but he isn’t a bad option right now while he is in the groove.

Brendan Harris, SS, TB: I didn’t mean to go back-to-back with the shortstops here, but I noticed that my SS, J.J. Hardy, has been killing me this month. So, I had to do some digging and find someone to play until he either figures it out again or gives me a reason to believe that he started hot and is now back to reality. So, Harris was the bleep on my radar. Having gone 30 for his last 104 at-bats is good enough for a .288 BA, and his 19 runs, six home runs, 21 RBI, and one stolen base over that stretch helped make my choice easy. Guzman has a better BA and slightly more runs scored, but Harris’ RBI and home runs we enough to give him the fantasy edge here.

Finally, for those of you that put Joe Mauer on the DL and picked up a catcher like Mike Napoli, it is time to cut Napoli loose and let Mauer get the starts once again. I too was one of them and have since cut Napoli loose as he has pretty much sucked over the past month.

By James Morris
This entry was posted on Friday, June 22nd, 2007 at 2:13 pm and is filed under BASEBALL, James Morris, The Wire Troll. You can follow any responses to this entry through the RSS 2.0 feed. You can skip to the end and leave a response. Pinging is currently not allowed.