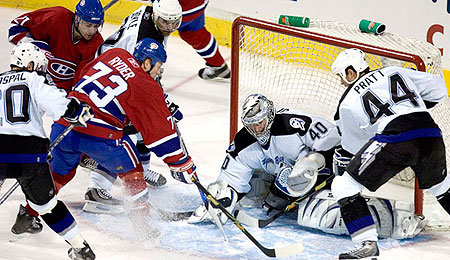 By re-signing Johan Holmqvist, has Tampa Bay cleared up its crease crisis?

Holmqvist took over as the number one man from the disappointing Marc Denis last season, and Tampa Bay rode the Swede throughout its six-game first-round loss to the Devils.

Does that mean the Bolts have finally settled on a goalie, something they’ve been trying to do since Nikolai Khabibulin left as a free agent in 2005?

Perhaps not. After all, with Denis still under contract for another two years at an average salary of $2.86 million, and the team only giving Holmqvist a one-year deal, there may be plenty of goaltending controversy still to come in Tampa Bay.

Heading into their first round matchup against the Devils, we expected the Bolts’ goaltending to be potentially huge factor. And sure enough, when Holmqvist was burned for five goals in Game 1 ‘ his first career post-season game ‘ it looked like the team would once again be a victim of poor netminding.

To his credit, however, Holmqvist really settled down after that debut, and although Tampa Bay was eliminated in six games, based on his play over the final five games, he couldn’t be faulted. At least coach John Tortorella resisted an opportunity to publicly roast him after Game 1. Of course, that might have had more to do with a perceived lack of secondary options than any real restraint on the part of Tortorella, never shy about sharing his opinions of his team’s goaltending.

Holmqvist was a virtual unknown before this season. Drafted 175th overall by the Rangers in 1997, he had played a grand total of four NHL games spread out over three years. He never made it back to the NHL after getting dealt to Minnesota in 2003, bouncing between the AHL and ECHL for two years and then spending two seasons back in the Swedish Elite League.

But now Holmqvist has been given somewhat of a vote of confidence by the team, not to mention an early birthday present (he’ll be 29 on Thursday).

The Bolts say they are prepared to enter next season with Holmqvist, Denis (who was the No. 1 man until faltering early this season) and Karri Ramo, a second-year man who’s believed to be ready for a bigger role, battling for two spots.

The possibility exists that the Lightning will try to move Denis in a draft day deal. The team would probably have to package him with a high pick or another part to help ease cap space and to entice someone to take on his salary. Failing that, the Lightning may even buy him out, although that would add about $980,000 to its cap for the next four years.

Holmqvist is coming off a season in which he set a career high in games played and enjoyed a solid 2.85 GAA to lead the team. His overall play in the postseason (2.94 GAA) was only slightly down from his regular season work, and the fact that he was essentially being asked to outplay future Hall of Famer Martin Brodeur (even if Brodeur looked a little more human in these playoffs), has to be considered when assessing his play. Still, I can’t get past the fact that Holmqvist was only given one year. This suggests to me that the team is covering its ass while it tries to sort out what to do with Denis.

It also seems a bit surprising that Holmqvist didn’t try to test the open waters as a free agent, especially considering this year’s class of goalies available is weak. Has he been promised the first crack at the top job in Tampa Bay? If so, the team brass isn’t saying so. They are talking about this move as it nothing is settled.

‘We had a good exit interview with Johan in terms of him understanding that even though he was called upon down the stretch it doesn’t mean he is a bona fide No. 1 goaltender and that he still has a lot to prove,” GM Jay Feaster said. “From my perspective, with him willing to talk about a one-year deal, it shows an understanding and a good self assessment of the situation.”

Tampa Bay’s thinking here must be that by giving Holmqvist just one year, he remains driven to prove he’s the main man, and if the team can’t get rid of Denis and he should rebound, well then, great. You’ve got the best of both worlds. And with Ramo pushing them both to stay sharp, perhaps at least one man will emerge as the obvious go-to guy between the pipes for the Bolts.

Or maybe they are due for another year of strife in the wake of the Bhulin Wall crumbling.

By RotoRob
Tags: Tampa Bay Lightning
This entry was posted on Monday, May 21st, 2007 at 1:22 pm and is filed under HOCKEY, RotoRob, Transactional analysis. You can follow any responses to this entry through the RSS 2.0 feed. Both comments and pings are currently closed.