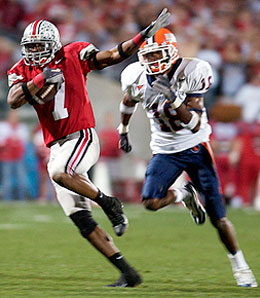 Welcome to another edition of the 2007 NFL Draft Recap! Thank you, thank you, you can gradually end the standing ovation.

This happens to be a very special draft profile. Ted Ginn, Jr. was drafted number ninth overall by the Miami Dolphins and I was actually able to sit down and talk to him about his NFL experiences so far.*

Andy Goldstein: Welcome, Mr. Ginn. Thanks for taking the time away from your adoring fans in Miami to talk to Rotorob.com.

AG: Uh, anyway, all fantasy owners need to know, how’s the Lis Franc injury doing? The one you suffered while celebrating your Bowl Game touchdown return?

AG: Ah, well, when you are healthy enough to go at full speed, you will be fighting for the top wideout spot, right?

AG: Okay, well, let’s talk long-term then. Why should the average dynasty owner keep an eye on you?

TGJ: It’s all about the speed, baby.

TGJ: Just see for yourself.

AG: That’s pretty good. Okay, so you have great speed. How about your hands?

TGJ: Did I mention my quicks?

AG: What are your thoughts on the quarterback situation in Miami?

TGJ: C-Pep is the man. Well, at least he was when Randy Moss was catching his jump balls.

AG: I see. What are your thoughts on Brady Quinn?

TGJ: I don’t get the big deal. If they took him instead of me, then he wouldn’t have an average third passing option.

AG: Right. Well, it sounds like you’ll be a slow starter who, after a few seasons, might be a third or, perhaps, weak second fantasy option for a couple years before you finally lose the insane speed and go back to being ‘not-Brady-Quinn.’

TGJ: I think you forgot the Peter Warrick comparison.

AG: Well, I was trying to be nice.

* Or, maybe I imagined this whole thing.

By Andy Goldstein
Tags: NFL, NFL Draft, Ted Ginn Jr.
This entry was posted on Tuesday, May 22nd, 2007 at 2:48 am and is filed under Andy Goldstein, Draft report, FOOTBALL. You can follow any responses to this entry through the RSS 2.0 feed. Both comments and pings are currently closed.