How Much More for Moyer? 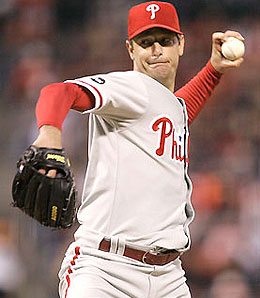 Worried about Jamie Moyer’s recent starts? Don’t be. He’s the master of adjustments.

Jamie Moyer has been roughed up in his last two starts, including last night, when he endured the worst bitch slapping he’s had as a Phillie, courtesy of the Jays.

It’s pretty well time to stick a fork in him right?

This 44-year-old lefty has been defying the odds with a fastball that can barely break a pane of glass since the Cubs drafted him in the sixth round way back in 1984. Why stop now?

Obviously the Phillies still think he’s got plenty left in the tank. After arriving in a late-season deal from Seattle last year, Moyer really got the job done, winning five times in eight starts including a 4-1 September that helped get the Phils back in the Wild Card race, even though the team seemingly raised the white flag with its moves earlier in the season.

Based on that performance, we corrected assumed that they would want the crafty southpaw back this year. What we didn’t expect was that they would want him for two more years. But sure, enough, Philly handed him $10.5 million in October for another two years of service.

Despite last night’s brutal start, Philadelphia’s faith in Moyer has been justified. He had pitched seven straight quality starts to open the campaign, and prior to last night, had a 12-4 record as a Philly, a run that included going at least six innings 15 times in 16 starts.

This doesn’t sound like a pitcher on his last legs. In fact, it’s just the opposite. Moyer’s name must be included in any discussion of the true workhorses in the game. He’s pitched at least 200 innings in six straight years and eight of the last nine. The only active pitcher with a longer streak is Livan Hernandez, who has done it seven straight times.

That kind of durability is a rare commodity is this age of peanut brittle pitchers. So what if he’s old enough to have gone to Woodstock? Who cares that he started the Geritol Bowl a week and a half ago against Randy Johnson? (By the way, it’s worth noting that this was the first time those two squared off since September 21, 1989 ‘ the longest gap between two starters facing each other in major league history.)

Saturday’s slaughter at the hands of the Jays ‘ 3 1/3 innings, eight hits and seven runs ‘ marked his shortest outing since Moyer pitched just 2 1/3 innings against the Yankees at Yankee Stadium on May 11, 2005. The last time he gave up seven earned runs in a game? Last July, against Boston.

Actually, it could have been worse last night. Moyer managed to avoid one of his greatest nemeses. Because the game was in a National League park, normal Toronto DH Frank Thomas was given the day off. Good thing, considering the Big Hurt has inflicted plenty of pain on Moyer over the years (.356, six homers, 13 RBI).

Obviously, you just need to keep Moyer away from those AL East teams.

Moyer is a definite NL-only league asset, and has some appeal in deeper mixed leagues. He’s proved he’s still capable of going out there and baffling teams. On April 19, he took a shutout into the ninth inning against the Nats (okay, so perhaps I could shut out the Nats too), and 10 days later he had a no-hitter through 6 2/3 innings against a decidedly better offense in Florida.

I’m definitely concerned that he’s given up six homers in the last three starts after yielding just one dinger over his first six starts, but Moyer’s track record for making adjustments leads me to believe he’ll be able to stem that trend soon enough.

When he came to Philly, Moyer was given a mutual option for 2007 as part of the deal. Many expected that he’d crumble taken out of the pitcher’s paradise that is Safeco Field. After all, his ERA at home the past three years was 3.89 vs. 5.45 on the road. Moving to the bandbox that is Citizen’s Bank Park would be disastrous for him, right?

Again, not so fast.

What we failed to include in our assessments was just how good this guy is at making adjustments. Going from a great pitcher’s park to a fantastic hitter’s park? No problem. Just start getting more ground balls. As basic as it sounds, that’s exactly what Moyer did. As a Mariner last year, he got 209 ground balls outs to 233 fly ball outs. That kind of ratio would have killed him in Philly, so just like that, he made a massive adjustment. In his eight starts as a Phillie last year, the ratio was 83 ground ball outs against 51 fly ball outs.

Apparently, it’s just that simple for Moyer. No wonder he’s been at it for 22 big league seasons and is signed through for a 23rd.

By RotoRob
This entry was posted on Sunday, May 20th, 2007 at 2:46 pm and is filed under BASEBALL, Player profile, RotoRob. You can follow any responses to this entry through the RSS 2.0 feed. You can leave a response, or trackback from your own site.