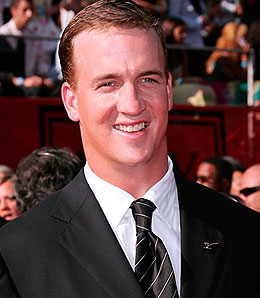 All is right in the world now that the inventor of electricity, Peyton Manning, has his ring.

Ladies and gentlemen, rise and shine. Your life has just begun! Peyton Manning won his first Super Bowl! That means free lunches, no new taxes, lower gas prices and an AFC South free agency report. In the immortal words of Bob Seger, the Jaguars, Titans and Texans are “running against the wind,” trying to catch the Colts who are armed with the quarterback that puts bread on your table each day. Seriously, if it wasn’t for Manning, you wouldn’t have electricity to use your computer and read this article. After you finish reading this, grab a pen and tablet and let him know how much you care. After all, if it was not for him, the QWERTY keyboard would have never been developed. Anyway, I digress…

The Skinny – A year after passing on Reggie Bush in the 2006 NFL Draft, the Texans decided to address their weak running game by releasing the once promising Williams and acquiring an aging Green. Somehow, I don’t think that evens out. Despite his affliction to hanging with women of extremely questionably character, Bush’s impact trumped that of DE Mario Williams. I guess Green is supposed to be the make good. Good luck with that, Houston. The Texans’ biggest acquisition of the offseason, QB Matt Schaub, will have a new tackle in Black who was a starter with the Chiefs. He’ll help one of the worst offensive lines in the NFL.

The Skinny – Years from now when a random NFL coach looks at a blueprint on how to repeat as Super Bowl champions, he’s not likely to grab the one labeled “2007 Indianapolis Colts.” The offseason saw the Colts ravaged by free agency. A defense that was thin to begin with took big hits to its depth by losing its starting cornerbacks. The Colts also lost a safety and defensive tackle which further eroded a run defense that was horrible for most of the season, until the playoffs, that is. Indy’s desire to shell out big bucks to Manning (understandable), Reggie Wayne (understandable), Dwight Freeney (understandable) and Marvin Harrison (eh, no thanks) may come back to haunt the team. The Colts could not recoup the defensive free agent defections and if they suffer any injuries defensively look out. They’ll struggle mightily. Meanwhile, Rhodes flew the coop to head to Oakland. This is great news for Joseph Addai owners since he’ll likely become the every down back. Other than that, the Colts put the A back in apathy during free agency.

The Skinny – You know, this Jaguars team would have been the bomb back in 1973. All defense, no passing game and a good running game. Seriously, they would have given a few of those Steelers teams a run for their money. OK, perhaps not but you get the point. The Jaguars’ antiquated way of doing things will cost them once again after a lackluster free agency period. Sooner or later, they’ll realize that the object of football is to score more points than the opponent.

The Skinny – The Titans were put in a difficult position because of the Pacman situation. With Jones out for the season, the Titans turned to former Colts cornerback Harper for assistance. Offensively, Bennett’s loss may expose the team’s lack of a veteran wide receiver. That surely will not help the looming spectre of the Madden Curse that will hang over Vince Young’s head until he gets through the season healthy. Good luck with that one, kid!

By Derek Jones
This entry was posted on Saturday, May 19th, 2007 at 2:02 pm and is filed under Derek Jones, FOOTBALL. You can follow any responses to this entry through the RSS 2.0 feed. You can skip to the end and leave a response. Pinging is currently not allowed.