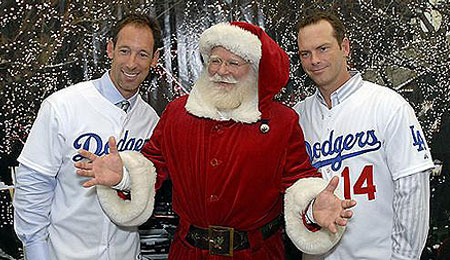 Having Luis Gonzalez, left, land in L.A. hasn’t exactly been anyone’s idea of a good Christmas present — especially his owners. The man who replaced him in ‘Zona, Chris Young, could be a good replacement for fantasy purposes as well.

Everyone wants to know how I assess the stats to find sleepers. Well, I use a complex method of Bill James’ and Doug Decatur’s formulas for statistics, and then I get right with Jesus before making the switch! But, here is a little nugget I will give you for free: The best metric for differentiating winning and losing pitchers is their home run rate. On average, pitchers who got jacked around the yard in April at a rate of 1.5 HR/9 or more didn’t get even half their innings pitched in the second half of the season. The ones who kept the rate under 1.0 HR/9 in April kept 83 per cent of their April workload. If you are bored enough to sort those stats out, you can play in my league any time!

Moving on, I love to look over the waiver wire and add/drop guys. I give guys some leeway, but enough is enough with Luis Gonzalez, Garrett Atkins and Robinson Cano. So, what do you do instead of them? Well, read on for my recommendations for the week.

OF Chris B. Young, ARZ: As his name suggests, the kid is young and he’s doing his thing. Young is showing some pop with the bat (.456 SLG), and speed with the legs (five steals), but his eyes need some work with that .299 OBP. He makes a solid fourth OF right now and could be good to start if you need a DL replacement or one your starters, like Gonzo, is struggling.

2B Pl’cido Polanco, DET: Polanco isn’t going to wow you with his runs and RBI, but his BA and OBP (.327/.366) say he will do well over the long haul of a season. If your 2B is just not getting it done, i.e., Cano, Josh Barfield or Chone Figgins, then give Polanco a good look.

RP Carlos Villanueva, MIL: Villanueva is someone I picked in my Diamond Mind league hoping he could get it done as a starter. He is getting it done for sure, just in middle relief. He has thrown 21 2/3 innings going for three wins, 21 strikeouts, a 1.25 ERA, and a 1.06 WHIP. If you need someone to throw some innings and lower your team’s ERA and WHIP, the Villan is someone that is flying under the radar. And bear in mind that if (when?) injury-prone Ben Sheets or another Milwaukee starter lands on the DL, Villanueva could get some consideration to start unless the Brewers decide to bring up Yovani Gallardo.

So, I figured I’d do something a little different here and give you some buy low and sell high candidates. I know you will think I am crazy, but I have a reason for my picks.

By James Morris
This entry was posted on Friday, May 18th, 2007 at 3:09 pm and is filed under BASEBALL, James Morris, The Wire Troll. You can follow any responses to this entry through the RSS 2.0 feed. You can leave a response, or trackback from your own site.