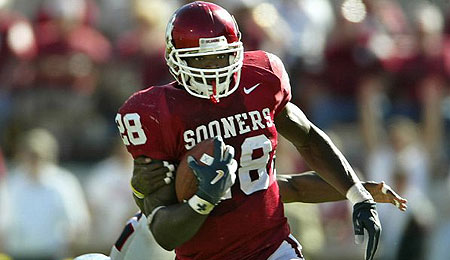 How would you like to be Chester Taylor these days (aside from the fact that he makes millions of dollars, of course)? Prior to the 2006 season, he signed the biggest contract of his career, a four-year, $14.1-million deal that included $5.6 million of guaranteed bonuses. In ’06, the newly minted Minnesota Viking ran for 1,211 yards and scored six touchdowns. It seemed like he was on his way to building a solid career in the Twin Cities.

Oops. Flash forward to the 2007 NFL Draft and the Vikings used the seventh pick to take Oklahoma running back Adrian Peterson. While Taylor was likely lamenting the selection and figuring out how he became the new Thomas Jones so quickly, the Vikings front office delighted in the selection of the draft’s most explosive and best back.

Taylor averaged 4.0 yards a carry which included a 95-yard touchdown run against the Seahawks. However, Peterson has a chance to be a home-run threat behind one of the best lines in the NFL. The 6’2″, 218-pound Peterson may push Taylor to the bench permanently by the end of next season. Don’t expect that to happen immediately though. The two will split the carries to start with.

After viewing the success of teams like Indianapolis, New England, Chicago and New Orleans, all of which used multi-back systems, the selection of Peterson by Minnesota makes sense. Plus, Peterson has a history of injuries which is one of his negatives. Adding him to the backfield could be a major bonus, yet the Vikings are supported by having Taylor as well.

Eventually Peterson’s breakaway speed and toughness will debut in the starting lineup. He’s too talented to consistently split carries with Taylor for more than a season if he stays healthy. If Brad Childress continues this whole Tarvaris Jackson charade at quarterback, the Vikings will run the ball a good amount to protect their neophyte signal caller. That will mean a good amount of opportunities for Peterson and Taylor to punish defenses with that massive line.

Peterson will have his ups and downs in his rookie campaign as most young backs do. Look for Taylor to still be the opening day starter and for the rook to spot him. The man known as “All Day” should be able to produce plenty of excitement in a division featuring sub par defenses (I’m not talking about you, Chicago). Unfortunately though, get ready to hear two words you’re not going to like in 2007 when dealing with Peterson — splitting carries.

By Derek Jones
This entry was posted on Thursday, May 17th, 2007 at 3:04 pm and is filed under Derek Jones, Draft report, FOOTBALL. You can follow any responses to this entry through the RSS 2.0 feed. You can leave a response, or trackback from your own site.