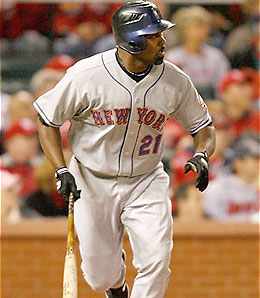 Although he’s playing a bit better lately, unless you like taking major risks, Carlos Delgado is not someone to target in a deal right now.

Good job on your columns in basketball and baseball! Keep up the good work!

I just need help with a trade.

I get Carlos Delgado, A.J Burnett and Mariano Rivera and I give up Adrian Gonzalez and Francisco Cordero. Should I do it?

Thanks and have a good one!

Cordero may be playing way over his head right now, but so are the Brewers as a whole. I think you’ve got to ride the wagon until the wheels fall off. Rivera is 37 and is showing every bit of it when he takes his gas can and match to the mound. The Yankees’ rotation and pen is old and rusty. I’m staying clear of everyone not named Roger Clemens.

Burnett isn’t bad, but at best is a solid fourth or fifth SP in most rotations. He isn’t going to do much for your fantasy team with the Jays looking at a sub .500 season. An ERA in the high 4s, near 1.50 WHIP, and more losses than wins helps how, exactly?

If it does help, then your staff is worse than the Yankees!

I pass on this swap because you take on guys you hope will rebound at 30, 34, and 37 years old. Not likely to happen in my opinion. Trading away currently producing players for buy low candidates is a bold move. Unless it is someone that you can just see is like one inch away from just busting out, I wouldn’t do it. Everyone knows the Yankees problems are solely in their pitching, so why trade for someone in the pitching department? Delgado just looks lost at the plate this year; I’d stick with Adrian there. Like my teachers always said, “Just say no.”

Looking for your advice again. Here is my lineup:

I have been offered Jason Bay for Cabrera. This would upgrade my OF and I could move Wright’to 3B and could start Renteria and Hardy. Do you think this is a good deal for me or am I giving up too much?

First of all, I’d move Hardy to DH and bench Wright until he starts being more productive. That being said, moving Cabrera for Bay isn’t something I would do for my team at this time. Let’s just use the Yahoo ranking system here since I happen to be looking at it right now. Bay is ranked 129 overall for the season, 149 over the last month, and 188 over the last week, which means he is getting worse as the season goes on (I like him in the long run, but the trend is slumping right now). Cabrera is ranked 22 over the season, 91 in the last month, and 173 in the last week. Same trend, but not nearly as bad.

If Bay is all you can get for Cabrera, I’d let him occupy my 3B slot until someone decides their 3B isn’t cutting it (perhaps see who drafted Edwin Encarnaci’n and see what he will give up) and ponies up to get him. If they won’t pay top dollar for a top 3B, then I pass. Even with his recent struggles (which he seems to snap out of Wednesday night), Cabrera is the fourth best 3B in fantasy baseball right now and I wouldn’t accept anything less than say Vladimir Guerrero, Barry Bonds, Aaron Rowand, or Shane Victorino (if you need BA and steals) for him. Top tier trades for top tier, Nerc.

Accepting less than full market value in a deal simply because you have a surplus at that position is how the balance of leagues are shifted ‘ and not in your favour.

A few questions…”
‘
1. I have Hunter Pence as my minor leaguer.’I have one week to activate him or lose him.’Out of these choices, who if anyone would you give up: Pat Burrell, Brian Giles, or Moises Alou? (If Alou goes on DL I can bring in Pence, but when Alou comes back I would have to choose between the two.)’
‘
2. I picked up Anthony Lerew of Atlanta for an injury replacement and he got rocked. Should I move the bum out?’
‘
3. Your thoughts on Justin Germano and Jorge Sosa?
‘
4. Eddie Guardado vs. Taylor Tankersley for saves?’

1. Since you have a minor leaguer, I will just assume this is a keeper league (no redraft leagues have a minor league system as there’s no reason to have one). I take Pence over Burrell. Alou is older, so maybe I drop him for Pence (especially since he’s once again wound up on the DL), but Burrell is horrible every single year and is a fantasy bust. Even if you only get one or two more years out of Alou, at least they will be a productive one or two years. Whatever you do, hang on the Pence. He’s a special player.

3. Germano has been unhittable in his 13 innings, but he is also 24 years old, which means, when the train stops, it is going to stop hard and fast. I’d take a chance on him, but I’d also be very picky as to when I started him. Sosa has burned me time and time again in the past. So, I don’t care if he has a 2.77 ERA/1.00 WHIP or not, I’m not touching him with a 10-foot pole. The guy is the walking plague. He has more 5+ ERAs than sub-5.00 ERA years. Pick up at your own risk.

4. Honestly, I’d say neither. Tankersley has been pretty bad so far this season. Guardado is coming back from Tommy John surgery at the age of 36. Good luck there. I feel better about Brad Hennessey of San Francisco than I do either of the two you mentioned.

Thank you so much for the help!

I just have another question regarding another league.

Should I trade B.J. Upton and get Julio Lugo?

They said on Rotoworld that with Upton striking out more than a third of the time and having only 11 walks after completing a quarter of the season, he might be vulnerable to multiple prolonged slumps. I’m thinking about trading him away for Lugo (who gives me an extra position of eligibility with shortstop).

Should I do it? Lugo is leading off for arguably the best lineup in baseball, but it’s kind of hard to give up Upton who is a five-tool guy and he has gotten off to a scorching hot start.

Here’s my team. Your help would be really appreciated.

Honestly, he could strike out 200 times if he keeps a .300/.400/.500 line. I would keep Upton as I think he is going to be very good the rest of the season. His stats will taper off, but he is still much better than Lugo is.

Even if you want to deal him, dangle him in a league e-mail and see what offers come in. I’d bet they are better than Julio Lugo.

By James Morris
This entry was posted on Thursday, May 17th, 2007 at 11:25 am and is filed under BASEBALL, Dear RotoRob, James Morris. You can follow any responses to this entry through the RSS 2.0 feed. You can skip to the end and leave a response. Pinging is currently not allowed.