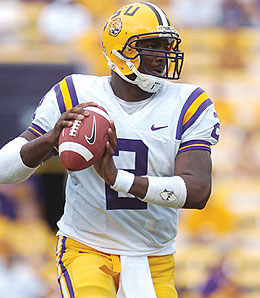 Can JaMarcus Russell build on his huge 2006 season as an Oakland Raider?

Let’s continue our fantasy rookie profiles with JaMarcus Russell. Russell, as everyone and their mothers know, was taken first overall by the Raiders and starts the season behind both Josh McCown and Andrew Walter on the depth chart. But at least he’s ahead of Josh Booty! Which brings me to the structure of this profile: Good Cop, Bad Cop! Sorry PTI, but I’m stealing your gig.

Good Cop: Russell had a remarkable 2006 season at LSU, notching 3,129 yards, 28 touchdowns and a completion percentage of 68.
Bad Cop: The rest of Russell’s college career was somewhat inconsistent, and it took a season like 2006 for him to attain the top draft slot.

Good Cop: Russell has two major assets, the first of which is his feet. He’s elusive for a guy his size, which means he’ll be able to escape the pocket and extend plays for his wideouts.
Bad Cop: Playing for the Raiders, he’ll have a lot of escaping to do. (Last year, the Raiders allowed a league-high 72 sacks.) On top of that, without Randy Moss in town, Oakland’s wide outs may need more than just a few extra seconds to find an opening. Oh, wait. Is it Jerry Porter’s breakout season again? My mistake.

Good Cop: The second major asset Russell posseses is his booming arm. He can hurl a ball 50+ yards with the flick of his wrist, and once actually threw a football completely out of a stadium from the field of play. Okay, that may have been in a commercial, and not Russell, but that’s not the point. Every one of his peers wishes they had his cannon.
Bad Cop: A strong arm is all nice and well, but that doesn’t mean he can make NFL decisions. Jeff George had a pretty nice arm, but no one mistook him for Johnny Unitas. Well, other than the Colts. And Falcons. And Redskins.

Good Cop: Russell made the players around him better. In fact, two of his wideouts went later in the first round. Dwayne Bowe and Craig Davis were improved by playing with Russell and that’s what he can do as a Raider.
Bad Cop: Russell was made by the players around him. Without those blue-chip talents, Russell would have been a marginal first rounder or early second rounder. And, as previously stated, the Raiders don’t have the best wide receivers in the league. Russell will be surrounded with the worst talent he’s played with since high school.

Good Cop: Russell will watch the NFL game for a year, maybe getting the occasional snap, and start in 2008 as a wisened and prepared quarterback.
Bad Cop: Russell will be thrown into the starting role due to the incompetance of the orginization, which results in many poor throws, hard hits, and scarred confidence.

So, are you feeling lucky?

By Andy Goldstein
This entry was posted on Wednesday, May 16th, 2007 at 2:12 pm and is filed under Andy Goldstein, Draft report, FOOTBALL. You can follow any responses to this entry through the RSS 2.0 feed. You can skip to the end and leave a response. Pinging is currently not allowed.