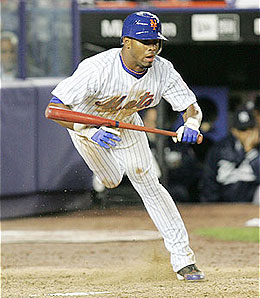 Is there anything Jose Reyes can’t do?

Shortstop is arguably the deepest and richest of positions in baseball. You have it all here — SBs, power, the established veterans and top touted kids. In my 20-team league draft, Jose Reyes, Jimmy Rollins, Hanley Ramirez, Derek Jeter, Miguel Tejada and Rafael Furcal all went in the first 32 picks and toss in Michael Young at 48 and this gives one a good idea of the relative strength here. Leading the charge is Reyes, currently one of the truly dominant players in the game.

1. Jose Reyes, NYM — At this time, he is quite possibly the most dominant all-around player in the game. Reyes is batting over .350 with an OPS around 1000, is closing in on 20 SBs, and is near the top in runs scored. He’s accomplishing all of this while both Carlos Delgado and David Wright are in the midst of huge slumps. Reyes should, at age 23, be set to be a top tier player for many years to come.

2. Jimmy Rollins, PHA ‘ Rollins has started off much the same as he ended ’07. It seems the power is very real, even though has been in a bit of a slump the past week or so. When the Phillies brought in Davey Lopes to work with Rollins, I expected to see an improvement in the running game and so far Rollins has not disappointed, going 8-for-9 in SB attempts.

3. Derek Jeter, NYY — Another fine start for Jeter. A recent move into the three slot will certainly help in the RBI totals. I am expecting a bit of a fade in the SB numbers from his 34 of last year, but he will hit for average and score a pile of runs in that lineup.

4. Miguel Tejada, BAL — The BA is there; now, if he would just add a bit more power, life would be good. Eventually, some of those base hits are going to add up in the RBI department.

5. Hanley Ramirez, FLA — At 23, he is one of the game’s brightest young stars and is not showing any signs of slowing down to start 2007 after his NL ROY season last year. Ramirez is on pace to score well in excess of 100 runs while topping 50 SBs with decent power. That trade with the Bosox has turned into a truly great deal for both parties.

6. Rafael Furcal, LAD ‘ Furcal is off to a slow start thanks to a twisted ankle he suffered at the end of spring training. As his health returns, so will the consistent play we’ve seen over the past five years.

7. Carlos Guillen, DET ‘ Guillen in turning into an on-base machine. His power is a bit off early on, but he’s sporting a two-to-one BB/K ratio early on and is hitting for average with nice RBI totals. Now if Guillen can just manage to break the odd/even year injury trend shown over the past several years, his owners will be very pleased.

8. Michael Young, TEX ‘ Two walks in the first six weeks of the season? Young hasn’t hit under .300 since ’02, but like the rest of the Rangers, he’s struggling in the early part of the year. Expect a bounce back, but how far back is another question.

9. Edgar Renteria, ATL — The trend of hot starts continued in 2007 for Renteria. He’s a very steady performer that seems to be enjoying life back in the National League with Atlanta.

10. Orlando Cabrera, LAA ‘ Cabrera is off to a decent start with his lower BA offset by his willingness to take the BB. Since the ’03 season, he’s 88-for-99 in the SB department, an 89 per cent success level. Expect more of the same this season.

11. J.J. Hardy, MIL ‘ Okay, now honestly guys, how many of you actually had him even on your draft lists heading into this season? For those that filled your SS slot with Hardy as an end play, enjoy the rewards while they last. Granted, he’s been hurt for most of his career to date, and is still very young at 24, but he has never demonstrated his current batting prowess at any level.

12. Julio Lugo, BOS — Hitting in front of both Big Papi and Manny, this guy has got to be scoring more runs than he has to date. He’s perfect so far in the SB department, but the BA needs to show some improvement.

13. Felipe Lopez, WAS ‘ It’s been a tale of two years for Lopez. The big power season of ’05 was replaced by the running game last year. He has to find a way to draw a walk but it looks like 2006, with a potential small drop in the SBs, should be considered the norm at this stage of his career.

14. Jhonny Peralta, CLE — A victim of the dreaded sophomore slump, he saw his ’06 numbers fall off a cliff in a big way. The power has returned and things are looking up so far this year for Peralta.

15. Khalil Greene, SD ‘ He’s always had the power potential, but just can’t seem to find a way to stay healthy. Greene is off to a decent start, but the BA will always be a concern.

With the depth at this position we have a group of players that are on the verge of breaking into our top 15.

Stephen Drew, ARZ ‘ He’s off to a slow start in ‘Zona, but has future star written all over him.

Troy Tulowitzki, COL — Only 22, Tulowitzki has come around nicely since mid-April after a slow start. He offers good power potential in the Mile High City.

Ryan Theriot, CHC ‘ Is he a 2B or SS, or just a super sub? Either way, Theriot is hitting for a good average and stealing bases.

Rookie Watch: Reid Brignac, TB — When you talk about future potential, this 21-year-old is at the top of the class. Brignac was named the D-Rays Minor League Player of the Year last season. He’s off to a great start to ’07 at Double-A and with just Ben Zobrist (sent down to the minors yesterday) and Brendan Harris currently manning SS on the big club, it’s only a matter of time before Brignac gets his chance. A September callup is certainly a very real possibility.

By Tim McLeod
Tags: Jose Reyes
This entry was posted on Saturday, May 12th, 2007 at 11:12 am and is filed under BASEBALL, Cheat sheets, Tim McLeod. You can follow any responses to this entry through the RSS 2.0 feed. Both comments and pings are currently closed.