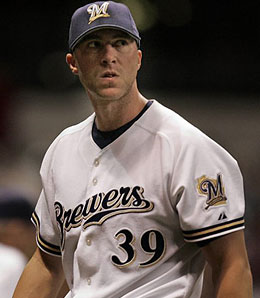 Alright, I admit it. I seem really fixated on what’s going on in Milwaukee lately. Watching them right now is akin to going to your high school reunion and finding out that the skinny, plain girl from your home room class is now a stunning goddess with a rack that you can’t seem to avert your gaze from. You find yourself wondering: are those real?

You could ask yourself the same question about the Brewers. Milwaukee is just such a great story, and the more I see, the more I believe that this is not a fast start — this is real (unlike the pair on your former high school ugly duckling).

With four straight wins and eight out of nine, the team has improved to 22-10 for the best mark in baseball (with another two games to play against the Nats). The Cubs, second in the NL Central, are hitting the snot out of the ball finally, averaging six runs per game in the past nine, eight of which have been wins. Yet, they haven’t gained a stitch on the Brew Crew and still sit 5.5 games back. The beleaguered Cardinals — that would be the beleaguered World Champion Cardinals — are dead last in the Central, nine games back.

But it’s hard to say that Milwaukee snuck up on anybody. The Brewers just had to endure a 22-game run against divisional opponents and they won 16 of those games. That’s over three weeks worth of the season that teams within its own division got an eyeful of the Brewers and have been able to draw their own conclusions.

It all starts with a staff that’s been nothing short of dominant, even if its leading winner from 2006 has yet to join the fun:

The attack has been equally impressive:

After Milwaukee disposes of the Nationals, it heads to Shea for three-game weekend set that is shaping up as very interesting indeed. I’m extremely curious to see how this team does against a true NL powerhouse.

By RotoRob
This entry was posted on Tuesday, May 8th, 2007 at 3:25 pm and is filed under BASEBALL, RotoRob, Team report. You can follow any responses to this entry through the RSS 2.0 feed. You can leave a response, or trackback from your own site.