Dear RotoRob: The Prince and the Papi 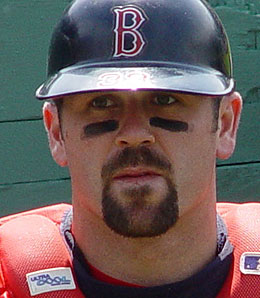 Is the upgrade from Jason Varitek to Brian McCann worth downgrading from Big Papi at first base?

I am weak at catcher (Jason Varitek) and I have been offered Prince Fielder/Brian McCann for Papi/V-Tek. Is there any way Prince comes close to Papi’s numbers?’All things being equal would you do this deal to help yourself at catcher? Thanks for all the great advice!

You basically break even in OBP, while gaining in BA and SLG. When you break the numbers down in a fantasy impact equation, you gain more than you lose. I would take it since Fielder is going to be pretty good this year and McCann is an elite fantasy catcher in the top two or three in the game.

Great columns as always. I play in an 11-team NL-only league and punted saves to start the draft. Last year I was able to acquire 70 saves from the end of May to the end of the season. I currently have Jon Rauch, Tony Pena, Todd Coffey, Pedro Feliciano and Matt Lindstrom. How many saves do you think I might have from them, and are there any other relievers in the minors that could pick up a few saves here and there that I could get from FA? Any info would be helpful.

Thanks for the support, man.

For relievers to look at on the waiver wire, I’d see if guys like Manny Corpas of Colorado, Michael Wuertz from the Cubs, Matt Capps of the Pirates are available, and maybe even someone like Rafael Soriano or Mike Gonzalez from Atlanta (although these two are likely to have been scooped up with Bob Wickman now on the DL).

The guys you mentioned aren’t really in the fold for save chances and you would end up with a handful of saves at best.

As far as minor leaguers, Jonathan Meloan of the Dodgers and Joey Devine of Atlanta are the only NL minor leaguers I can think of who will likely get a shot this year. Maybe Marcus McBeth will get a chance in the Cincy mess? Finally, there’s Paul Estrada for Houston.
‘
Those four are just prospects, though. There are probably some veteran relievers waiting a chance.

I assume you mean Alfonso Soriano. Going from Berkman to Soriano from a pure fantasy standpoint (position not included) is a good move right now. Soriano is on pace for a very nice fantasy season, but I would want to know where his speed went. Berkman is slumping to start the season, however, I do expect him to come around soon (and it looks like he is with hits in four straight games).

Now, Cain has been about as unhittable as a pitcher can be in professional baseball. Dontrelle “Whatchu talkin’ ’bout” Willis has a 5-1 record, but is killing his fantasy owners each time he takes the mound. Outside of his first start, he has given up between three and six runs each start. He is running out to the mound with his gas can and match and just starting fires all over the park. He may be winning, but he is making your ERA and WHIP goes up each time he notches another W for your team.

The only reason Wells still has a job is because he is a lefty. Otherwise, this guy would be playing in an Independent league with Ricky Henderson and Jose Canseco. Brett Myers (again, assuming that’s who you meant; note that it’s always easier to answer these questions if you provide the player’s full name to avoid confusion) has brought his ERA down to 6.20, but that should tell you how bad he has been this season if it came down and it is still that high. I thought Myers might make it back into the rotation but now there seems to be a great chance that he will be the Phillies’ closer going forward, with Flash Gordon out.

Now, all that being said, I think you can walk away and feel solid about the trade. Soriano is having a good season, but don’t forget he is a career .280/.325/.509 hitter (he is at .313/.345/.518 now. The slugging is right on, but the BA is up and the OBP should come down a bit). Berkman will improve, but he isn’t right now. Wells is junk, but so was Myers when he was starting. One has potential to turn it around this season (and definitely appears to be doing so) and the other has a beer gut. Willis has nasty skills, but his ERA has climbed in each of the last two seasons (2.63 in 2005 and 3.87 in 2006), and looks to be headed to around 4.25 this season if the trend continues. I would have tried to stay away from Cain for Willis, but the rest looks fine.

By RotoRob
This entry was posted on Saturday, May 5th, 2007 at 4:54 pm and is filed under BASEBALL, Dear RotoRob, RotoRob. You can follow any responses to this entry through the RSS 2.0 feed. You can leave a response, or trackback from your own site.