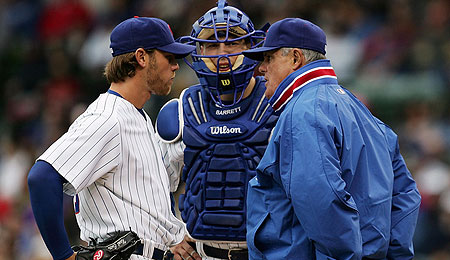 If Neal Cotts, left, or one of the other Cubs’ southpaw relievers struggles or gets hurt, Chicago has a homegrown boy in the minors ready to help.

The Cubs pitching, and in particular their bullpen, is looking solid right now, but if injuries or ineffectiveness require them to reach down to the minors to grab another reliever, there’s a local boy currently pitching at Triple-A who appears ready to make his MLB debut.

Carmen Pignatiello, a 24-year-old southpaw taken in the 20th round back in 2000, was promoted to Triple-A last weekend, and so far this season, he’s been virtually untouchable, going (combined Double-A and Triple-A numbers) 1-0, 0.00 with just four hits and two walks allowed in nine games and 10 IP, fanning nine and saving two.

This hometown boy, a former Chicago high school star who also attended Illinois St., was stalled at Double-A for a while, but seems to have broken through since becoming a full-time reliever last year. Between Double-A and Triple-A last season, he fanned 78 and walked just 21 while giving up only 59 hits in 67 innings. His career K/9 mark of 8.46 has risen even higher since the switch to the pen.

Although he’s not on the 40-man roster, Pignatiello looks like he can help the Cubs should the need arise.

As mentioned, however, the pen has been great, with a 3.14 collective ERA compared to the team’s overall staff mark of 3.57. Currently, Chicago is employing three lefties in its pen ‘ Neal Cotts, Scott Eyre and Will Ohman ‘ with mixed results. Cotts has been pitching very well (0.00 ERA and just four hits through nine innings), but with five walks, has he been dodging bullets? Eyre has really been firestarter, but because he’s a veteran in the middle of a multi-year deal, the Cubs don’t have much flexibility with him. Ohman has become more hittable since his stellar 2005 season, but he remains a solid option.

So for the time being, Pignatiello is not needed, however, I think he’s a name worth watching. Considering he was the closer at Double-A to begin the season, and no one really has great confidence in Ryan Dempster over the long term, his solid beginning to 2007 notwithstanding, who knows how things will shake out as the season progresses?

By RotoRob
This entry was posted on Sunday, May 6th, 2007 at 4:59 pm and is filed under BASEBALL, RotoRob, Team report. You can follow any responses to this entry through the RSS 2.0 feed. You can skip to the end and leave a response. Pinging is currently not allowed.